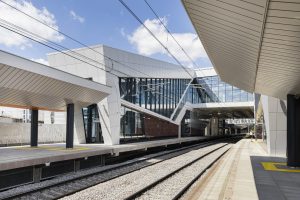 The first floor is underground, where the passage from the concourse to the opposite street is located. On the second floor there are platforms and entrances, on the third floor there is a concourse with ticket offices and turnstiles.

“These are new opportunities primarily for the residents who live in the area. Historically, the two neighborhoods were separated by the railways, now, in addition to its transport function, the station also has a transit function, where residents of one neighborhood can cross the rail tracks, saving more than 20 and some of them 30 minutes of time,”Maksim Liksutov, the Deputy Mayor of Moscow for Transport said.

This is a modern suburban station of the European level – an interweaving of the most complex engineering structures, the total area of which exceeds 11.2 thousand square meters.

It includes two platforms with full-length canopies and a large above-ground hall with passenger services: ticket offices, turnstiles, elevators, escalators, modern navigation, electronic scoreboards and a restroom. Using an elevator, escalator or stairs from the platforms passengers can get to a large overground passenger terminal with 4 cash desks, including one underpass for passengers with disabilities, turnstiles, electronic scoreboards and restrooms. Barrier-free environment was created at the station with 10 escalators and 5 elevators being installed for access to the city and platforms. The modern infrastructure meets all passengers’ needs and is convenient for everyone – the elderly, mothers with baby carriages, passengers with disabilities.

Heat curtains and infrared heaters are also installed on the infrastructure, which will allow passengers to feel convenient even in cool weather. A covered above-ground gallery leads to the two street exits, towards the Line 10 of the Moscow Metro and to the future Big Circle Line (BCL) station. A new crosswalk leads to the opposite side of the station.

The opening of Pechatniki MCD-2 station has launched the formation of a unique and largest transport hub, which will include the Moscow Metro Line 10 and the BCL, the MCD, the surface transport, as well as new road infrastructure.

The construction of the new MCD-2 suburban station began in the fourth quarter of 2019 and during the 3 years of works, the train traffic was not interrupted.  Pechatniki station was built by using the most advanced transport solutions for maximum passenger comfort.

Since the Moscow Central Diameters launch in November 2019, 27 stations have already been opened on the existing and future MCDs. This year, the authorities plan to open 7 more stations.