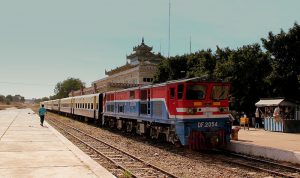 The project envisages the increase of transport capacity by the modernisation and rehabilitation of the existing railway infrastructure and related facilities on the Yangon – Toungoo section, on the Yangon-Mandalay railway.

The consortium of Sumitomo, Fujita and Nippon Signal was awarded the contract for the 71-km  Pazundaung – Bago section, part of the Yangon-Mandalay railway project. The consortium will be responsible for track work, civil engineering, bridgework, station work, and work on all signalling and communication equipment. Groundbreaking ceremony was held in May 2019. Under the USD 168 million (JPY 18 billion) contract, the construction work is expected to be completed by March 2023.

Yangon Circular Railway is also part of the Yangon-Mandalay railway project, which will improve the efficiency of passenger transport capacity by rehabilitating and replacing the existing railway facilities and the rolling stock. For this project, JICA signed a USD 231.8 million (JPY 24.8 billion) agreement which will support signalling system improvement and the procurement odf new DMUs. The project will be completed by 2023. 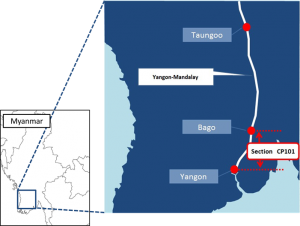 The Yangon-Mandalay railway project is carried out within two sections, the first one from Yangon to Toungoo and the other form Mandalay to Toungoo. Three contractors have been selected for the Yangon – Taungoo section split into three subsections. Sumitomo consortium will perform construction works for Pazundaung – Bago, the Tekken-RN joint venture will be responsible for Bago –Nyaunglaypin section, while Tokyu is the main contractor for Nyaunglaypin –Toungoo section. All the subcontractors are companies from Myanmar. Command-control centres was constructed in Ywathr Gyi, Pyuntansar and Oat Twin.

The Yangon-Mandalay railway has a total length of 620 km, connecting Myanmar’s largest commercial city Yangon with the capital Naypyidaw and Myanmar’s second-largest commercial city Mandalay. The railway line has been seeing rising passenger and cargo transport demand, but is facing lower operating speeds, delays and derailments because of the aging of its existing facilities, equipment and rolling stock.

Currently, trains take 14 hours to travel from Yangon to Mandalay. After modernisation works, travel time will be cut to 8 hours.