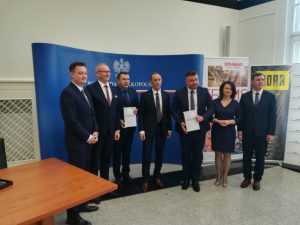 Polish railway infrastructure manager, PKP PLK, signed four contracts to modernise the Wronki – Słonice section on the Szczecin – Poznań main line. Three contracts include modernisation works, while one contract will see the installation of the signalling and telecommunication systems. PLN 1.4 billion (EUR 327.4 million) is the total value of the signed contracts which are expected to be completed in 2022.

The project envisages the modernisation of the 150 km Wronki – Słonice double track line, the installation of additional safeguards at level crossings. 29 rail-road crossings will be modernised and equipped with new barriers, light and sound signaling devices, and new rail traffic control devices will be installed. 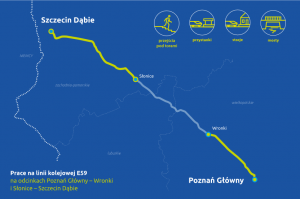 The contracts for the modernisation works have a total value of EUR 281 million, while the signalling and contract amounts EUR 47.2 million.

In Szczecin area, two contracts were signed, of which one for modernisation works and one for the installation of signalling system:

“I hope that the section between Wronki and Słonice will be rebuilt efficiently and in 2023 I’ll be the first passenger to check the travel time and comfort of the journey,” said Łukasz Mikołajczyk, the Voivode of Greater Poland.

As part of the works on Wronki – Słonice section, 10 stations and stops will be modernised. Each of them will be fully adapted to the requirements of the passengers with reduced mobility. The modernized platforms will be equipped with sheds, benches and information systems as well as ramps to facilitate access to the platforms. 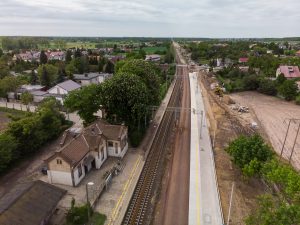 y, on the Poznań – Szczecin main line, works are underway on the Poznań – Wronki and Słonice – Szczecin Dąbie sections, which are expected to be completed in 2020. The trains are already running on a new track for about 30 km from Poznań to Kiekrz, Pęcków to Wronki and from Rokietnica to Szamotuły, while the tracks are laid on other routes.

After completing all the work and obtaining the necessary permits, the fastest trains will travel from Poznań to Szczecin at a speed of up to 160 km/h. This will shorten the travel time between Greater Poland and Western Pomerania. A modern traffic control system along with modernisation of the level crossings will increase safety, and the new local control centers in Poznań and Stargard will ensure efficient rail services along the entire route.

The reconstruction of the E59 Poznań – Szczecin line worth about PLN 4 billion (EUR 935.4 million) and is one of the largest projects under the National Railway Programme. The project co-financed by the EU through the Connecting Europe Facility.