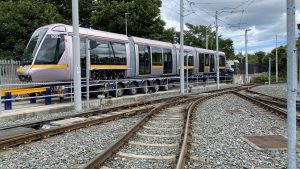 The first two of eight new Citadis trams for Dublin have been delivered as part of a contract signed between Alstom and Transport Infrastructure Ireland (TII) and the National Transport Authority (NTA) which includes the extension of 28 exiting trams.

The new tram has been manufactured at La Rochelle plant was shipped to Ireland and assembled in Transdev’s Sandyford depot.

The first of the new trams, manufactured in La Rochelle, have been shipped to Ireland and assembled in Transdev’s Sandyford depot. The first two Citadis trams for Dublin entered passenger services on July 29.

The eight newly-ordered tramways will be 55 meters long, the longest single unit Citadis trams in the world, offering more capacity to support demand in Dublin’s rush hour. The new tram has a capacity for up to 344 passengers. The vehicles are up to 98% recyclable.

Each of the 28 extended trams will also be 55 metres, from 30 metres currently. “This brand new 55m tramway will create more space for passengers on Luas, and we are proud to be working with Transport Infrastructure Ireland and Transdev to improve the service for everyone that uses it,” Nick Crossfield, Manging Director, UK & Ireland said.

Alstom, with the two Irish authorities agreed to fit its new eMapping technology to some of Dublin’s tramways fleet. By the end of the year, four tramways in the city will be fitted with remote sensors that compile data on energy usage. Alstom and Transport Infrastructure Ireland are aiming to reduce energy consumption on Dublin’s tramways through a series of energy efficiency measures.

In November 2017, Alstom has delivered the first 55m-long Citadis tram to Dublin under a EUR 35 million agreement signed with Transport Infrastructure Ireland.