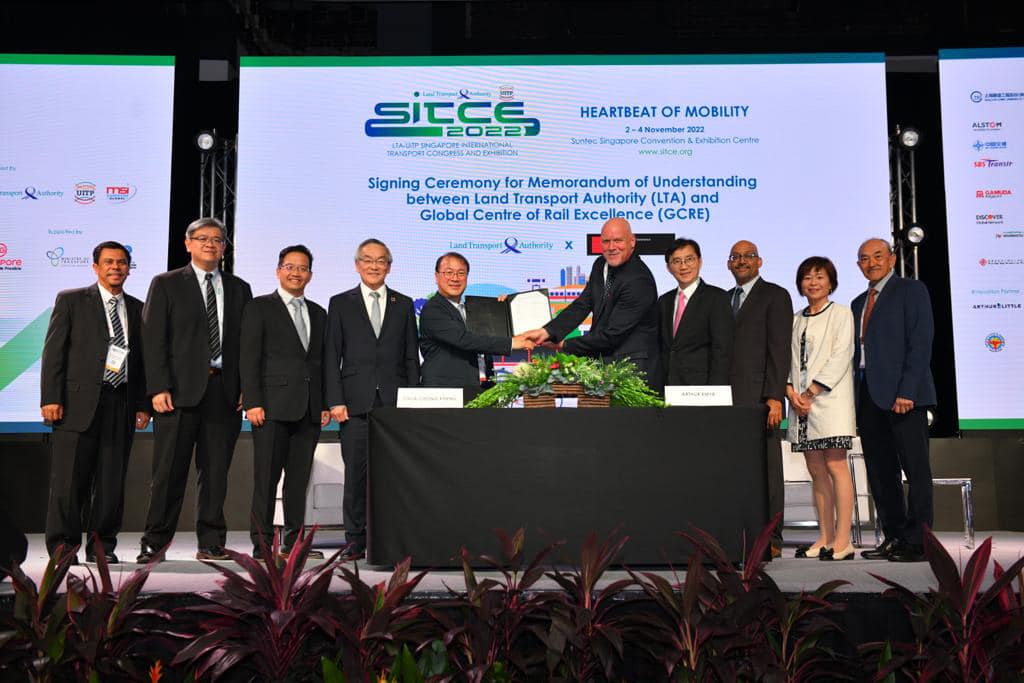 Singapore’s Land Transport Authority (LTA) and the Global Centre of Rail Excellence (GCRE) signed a Memorandum of Understanding to collaborate and build capabilities for the development of train testing centres in Singapore and the United Kingdom.

Both sides will exchange information and share best practices in areas such as design and engineering, asset management as well as operational aspects of train testing centres. Where feasible, both parties will also arrange for secondment and other talent exchange opportunities to participate in project work as well as technical visits to railway facilities and sites in United Kingdom.

Currently under construction by LTA, the Integrated Train Testing Centre (ITTC) will be the first train testing facility in Southeast Asia. It will support the testing and commissioning of trains and railway systems for both new and existing rail lines. Occupying a site of 50 hectares and with a 10.8 km testing track the ITTC will be equipped to test trains and other core railways, systems such as electrical, mechanical and signalling systems, around the clock without affecting passenger service on all operational lines.

Over time, the ITTC has the potential to grow into a hub for LTA and the local rail industry to develop stronger operations and maintenance competencies. The facility will provide railway workers with training opportunities and give them a first-hand understanding of the intricacies of new rail systems before actual deployment. In addition, the ITTC can serve as a testing ground for the local rail industry to evaluate new railway infrastructure, develop proofs-of-concept, as well as conduct research and development into railway technologies. Equipped with a rolling stock facility, the ITTC is also capable of handling mid-life train refurbishment projects.

“The ITTC is central to our efforts to renew, upgrade and expand our rail network. This partnership with GCRE will help develop and grow mutual capabilities in operating such testing facilities,” LTA Deputy Chief Executive of Infrastructure and Development, Chua Chong Kheng said.

The first phase of the ITTC, which includes the construction of the high-speed track for dynamic speed testing of up to 100km/h, is expected to be completed in 2023 for testing Circle Line 6 trains. The facility is expected to fully commence operations in 2025.

“Work on the ITTC is well underway and, once complete, will provide specific endurance and integrated train testing in a safe and secure environment. It will be suitable for all train types and systems deployed in Singapore which provides us with a great opportunity to collaborate and learn from each other,” Simon Jones, Chief Executive of GCRE said.

The GCRE facility, located in South Wales, includes two test loops with a 6.9 km track allowing testing at 180 km/h and a 4 km test track to allow high tonnage testing at 60 km/h. Other facilities will include a dual-platform test environment, rolling stock storage and maintenance facilities, operations and control offices, staff accommodation, shunting staff facilities and connections to the nearby main line. There will also be state of the art secure testing environments; equipment, systems, and communications development facilities. GCRE is expected to be fully operational in the summer of 2025.