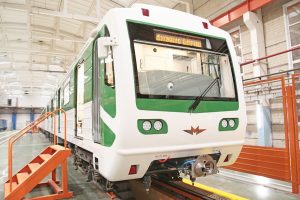 Under the agreement, Metrovagonmash will carry out major repair and upgrade works for three 4-car metro trains (12 metro cars) of 81-717.4/714.4 series. The contract includes an option for other 40 cars.

The exterior and interior of carriages will be upgraded, and the potentially flammable interior trim materials will be replaced with other ones that meet modern requirements for passenger transport safety.

The wheel axles will be equipped with anti-slip and anti-skid protection, and new intercar couplings will be installed. The overhaul and modernisation of the Sofia metro trains will extend their service life by 15 years.

The modernised metro cars were delivered to the Sofia Metro in early 2020.
Metrowagonmash and the Metropolitan EAD have been cooperating since 1998. Almost the entire fleet of metro carriages in the capital of Bulgaria, totalling 168 metro carriages, were manufactured by Metrowagonmash at the Mytishchi plant, near Moscow.