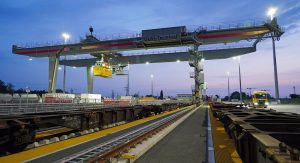 Ronald Pofalla, DB’s Member of the Management Board for Infrastructure and Enak Ferlemann, state secretary at the German Federal Ministry of Transport and Digital Infrastructure, have launched the Lehrte MegaHub container terminal, situated in the district of Hanover.

The containers are loaded at record speed at Lehrte as the process takes just a few minutes, ensuring that goods reach customers faster.

The hub’s aim is to boost the appeal of rail freight transport and DB will use the new terminal to shift more cargo to the eco-friendly rail network.

Up to 13 trains are formed every day at Lehrte MegaHub container terminal, which corresponds to some 250,000 lorry journeys every year and an annual reduction in CO2 emissions of 120,000 tonnes.

“Shifting freight to the green rail system is one of the simplest and most effective measures for protecting the climate. Transhipment processes at Lehrte are faster than anywhere else in Germany. With every train that departs from here, we remove 52 lorries from our roads and thereby automatically cut CO2 emissions,” Ronald Pofalla said.

At the container rail terminal, the cameras register the loads carried by trains and lorries when they enter the facility, which covers an area of 120,000 m2.

Three 20-metre-high cranes and 12 autonomous electric transporters sort the containers and allocate them to freight trains with pinpoint accuracy. A central computer system oversees the work of loading and moving the containers. Operations at the terminal are particularly quiet and energy-efficient: when trains arrive, they use their momentum to roll onto the tracks beneath the cranes without drawing electricity from the power grid. The site offers potential for expansion to twice the number of cranes and up to 20 transporters.

The German government and DB have invested EUR 171 million in the new container rail terminal.

“The government’s clear political objective is to shift traffic from road to rail. This requires cutting-edge transhipment facilities. Lehrte MegaHub uses ultra-modern solutions and symbolises these policies. It sets an example for many more facilities in Germany to follow,” Enak Ferlemann said.