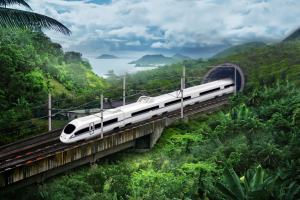 Malaysian Ministry of Transport has changed the original alignment of the East Coast Rail Link (ECRL) by extending the line to 665 km from the initial 640 km to maximise the economic and technical benefits of the entire project and its spillover effects.

Under the new alignment, the estimated cost of the ECRL is RM 50 billion (USD 12.1 billion), which is less than the ECRL 2.0 version by RM 5 billion (USD 1.21 billion) because the southern route included the Serendah Bypass in a separate section.

Wee Ka Siong, the Minister of Transport said that 70% of line’s objective is to ensure freight transport services, while 30% for passenger services and in this context, the new alignment will provide the needed infrastructure for returns.

The new ECRL (3.0) alignment, based on the original alignment of the ECRL project back in 2017, allows for a bypass line from Serendah to Port Klang for Malayan Railways’ (KTMB) services to be integrated into the entire project.

In addition, the new alignment aims to complement the establishment of a national cargo hub in Serendah and improve cargo moving efficiency for both KTMB and ECRL. This is important because 70% of ECRL revenue will be derived from freight transport.

The national cargo hub will form a part of rail connectivity from Serendah to economic corridors and ports in Peninsular Malaysia, including the Northern Corridor Economic Region (NCER) and Penang Port, the East Coast Economic Region (ECER) and Kuantan Port, as well as Iskandar Malaysia and Port of Tanjung Pelepas in the south. Linking via the original alignment to Port Klang with West Port and North Port gives a more direct route to international trade and makes it more attractive for business by greatly boosting export-oriented industries. This ‘last-mile’ connectivity links Kuantan Port and Port Klang under the ECRL 3.0 bringing both coasts closer together with a land bridge between them to ease transfer of goods.

The new ECRL alignment is also expected to boost new developments and townships as well spur commercial activities in relatively new areas like Puncak Alam and Kapar which have both been designated as future stations for the ECRL. A station at ITT Gombak conveniently caters to Klang Valley commuters traveling to the East Coast states as Gombak is familiarly known as a gateway to orfrom Kuala Lumpur. ITT Gombak also provides a link to the LRT Kelana Jaya Line.

Therefore, the northern alignment is expected to generate immediate traffic for both passenger and cargo for ECRL even in the first years of its operations, the Ministry of Transport says.

The East Coast Rail Link is carried out under the One Belt, One Road initiative and will connect the

eastern coast of Malaysia with the western part of the country and is constructed by the Malaysian subsidiary of China Communications Construction (CCCC), which will operate the line together with Malaysia Rail Link on a 50:50 joint venture basis. Although the works were suspended in 2018 due to high associated costs, the line is currently 20% completed and is expected to be operational in 2026.