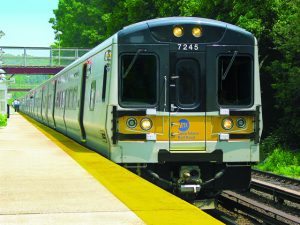 The pilot project will be tested to prove its operational viability on the rail’s Port Jefferson and Oyster Bay branch lines.

The technicians will retrofit a two car-long electric train to operate on battery power without passengers on the Oyster Bay Branch. While on electric portions of the route, the train would run on third rail power and charge the batteries, then switch to battery power for the unelectrified segment between East Williston and Oyster Bay.

As part of the initial assessment, technicians will investigate whether and where recharging stations might need to be built along the route and along other branches. Recharging would take place in yards when trains are out of service, and, if necessary while in-service, during existing station stops that would not be delayed by recharging.

If successful, the LIRR would ultimately be able to carry passengers directly between Oyster Bay and the railroad’s terminals in New York City without the need for a transfer, and that technology could expand to the rest of the railroad’s diesel branches. 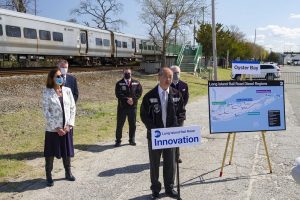 “Embracing new technology might allow us to essentially electrify the entire railroad without the need for billions of dollars in massive capital investments. The MTA is already transforming the LIRR through East Side Access and Main Line Third Track; this is potentially a no less profound transformation for the rest of the railroad,” MTA Long Island Rail Road President Phillip Eng said.

The units could potentially replace the use of diesel locomotives on the operator’s non-electrified lines and allow passengers to travel to their destinations without having to change trains.

The conversion to battery electric multiple units is the North America’s first such project, and if successful could be deployed anywhere diesel commuter trains operate on the LIRR or Metro-North Railroad.

If batteries succeed on the LIRR, the use of battery-powered railcars promises over the long term eliminate the need for transfers to a separate diesel fleet to reach the railroad’s expansive unelectrified regions extending 257 km from East Williston to Oyster Bay, Huntington to Port Jefferson, Babylon to Montauk and Ronkonkoma to Greenport.

The M-7 electric multiple units in operation at LIRR were manufactured by Bombardier Transportation, which is now part of Alstom.  The M-7 cars make up the majority of LIRR’s fleet and after nearly 20 years of operation, continue to exceed the operator’s reliability goals.

In the near term, conversion of a fraction of the railroad’s 836-car “M7” electric fleet to operate with battery power on even just one of the railroad’s unelectrified branches would allow the LIRR to consolidate its diesel fleet on remaining unelectrified branches, enhancing the frequency of diesel service there and lengthening trains. In recent years, the LIRR has seen such a surge in seasonal demand for diesel service that it has had to lease additional cars from Maryland’s MARC train system.