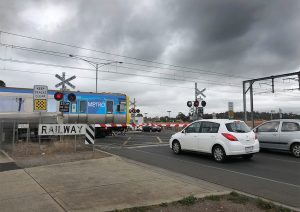 The project will free up Sunbury’s worst traffic bottleneck two years earlier than first planned, with the new road under the rail line in place by the end of 2022 and all work completed in 2023.

Early works for the project began in July, with workers digging alongside Gap Road and Station Street to relocate underground services, making way for the start of major construction.

The Gap Road level crossing, will be replaced with a new rail bridge and a road underpass on Gap Road/Station Street, including a new shared path on both sides to provide a safe connection for pedestrians and cyclists.

Hundreds of piles are driven as deep as 13 metres into the ground to support the new rail bridge and retaining walls for the lowered road. The construction of the rail bridge will start in 2022, followed by excavation of the roadway.

The final designs for the removal were released showing bridge supports originally between the footpath and road have been removed to improve visibility and safety for pedestrians and cyclists.

Under the rail design, the road will ensure the heritage-listed Sunbury station is preserved and have the least impact on rail services during construction, although there will still be some disruption at times.

The Gap Road level crossing is Sunbury’s most congested, with the boom gates down for up to 26 per cent of the morning peak. About 19,000 vehicles pass through the crossing each day, expected to rise to 27,000 by 2026.

The AUD 2.1 billion (USD 1.55 billion) Sunbury Line upgrade project will see various upgrades within the rail corridor extending from Sunbury to Footscray. The project will prepare the line for bigger, more modern trains that will run when the Metro Tunnel opens in 2025, giving passengers access to five new stations in Melbourne’s CBD, Arden, Parkville and St Kilda Road, and a future link to Melbourne Airport Rail.