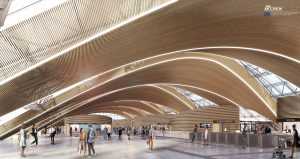 RB Rail has published the “Riga Node operation optimisation study”, a strategic study for the railway passenger services in Latvia, carried out by the German railway consulting company Ramboll Deutschland GmbH in 2020-2021.

“The principles set up by the Riga Node operation optimisation study are paving the way to a revolutionary transport service at the service of our citizens and will gradually become reality in the coming years. This will be a major step toward a better mobility, and decisive factor to achieve greenhouse gas reduction targets in Latvia,” Talis Linkaits, the Minister of Transport in Latvia said.

The key objective of this study was to make an in-depth analysis, including benchmarking with international railway passenger services and latest developments, and to redefine the future offer for an alternative and overarching railway transport in Latvia and in the neighboring countries, considering all future benefits and opportunities which will be brought with implementation of the Rail Baltica mainline and economic corridor.

The study also investigated the opportunities to integrate railway system into Riga public transport system by creating a timetable which allows 15 minutes interval for urban and sub-urban trains, that way endorsing integration of the train and bus timetables across the rail network, in the future mobility hubs.

The first results of the study are already implemented with the so-called Rail Baltica construction timetable starting March this year. The passengers can observe a regularity of arrival and departure times across the network to the extent possible during the construction stage of Riga Central station.

“The start of operation of the new suburban trains of Pasažieru vilciens and the completion of Riga Central Station reconstruction will bring next significant improvement of the railway timetables offering a better regularity and regular frequency of the train services,” Talis Linkaits, Minister of Transport of Latvia said.

The timetable anticipates full integration and synchronisation of the transport systems and includes all the train categories such as the high-speed trains, he regional and suburban trains as well as the night trains running on Rail Baltica and on Latvian rail network.

“In the professional railway industry terms, the new timetable shall be called symmetrical regular interval timetable, whereas for the citizens and future railway passengers it will mean several things – first, the timetables that would be easier to memorize as the trains would only run on the same schedule every hour and, secondly, the exchange between the trains in the Riga Central station would be made as convenient as possible from and to any directions,” Ralf Jugelt, Senior Consultant at Ramboll Deutschland GmbH explains.

To carry out the study, an extensive working group was established involving experts from all main railway sector players in Latvia, including the Ministry of Transport, Latvian Railway, Pasažieru vilciens, Autotransporta direkcija, Rail Baltica global project coordinator and the joint venture RB Rail AS as well as the national implementing body Eiropas Dzelzceļa līnijas. The study was coordinated by the Systems and Operations team of RB Rail AS on behalf of the Ministry of Transport in Latvia.