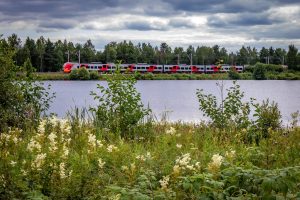 Russian Railways presented its project for automated electric trains along the Moscow Central Circle with two Lastochka trains being already equipped in accordance with the third level of automation (GoA3).

The trains are equipped with positioning equipment with an automatic guidance system and an obstacle detection unit on the track, as well as equipment for communicating with the remote control centre. In unmanned mode, the electric train is able to follow the energy – optimal schedule and can automatically calculate braking and stopping algorithms when an obstacle is detected.

The automated electric trains equipped with the innovative technology allow automatic movement and stoppage control but requires human participation in closing and opening doors and in emergency situations.

The Russian Railways presented the trains on June 9 during the international webinar “Technologies for autonomous guidance in railway transport: anticipating expectations”, a part of RZD’s chairmanship of the International Union of Railways International Council for Railway Research. The webinar was dedicated to current issues, challenges and complex tasks to be solved in the field of rail automation. More than 400 representatives from railway companies and research and educational institutions in the field of railway transport from all over the world took part in the webinar.

To date, the equipped – Lastochka trains have passed around 2,000 tests in motion under various weather conditions. At the fourth level of automation (GoA4), the control system will perform the entire range of train management, monitor, and diagnose on-board equipment and automatically open and close doors. Three modes will be controlled by the driver from the cab, both remotely (from the train driver’s workstation) and automatically.

In the Moscow region, Russian Railways tested two trains in GoA3 (Grade of Automation 3) and another one was in GoA4 design phase in April. Based on the tests with the first train, RZD developed the second Lastochka with GoA3+, an improved technology with obstacle detection unit (ODU), featuring additional infrared camera, a new set of cameras and ultrasonic sensors for close distance.

The implementation of new technologies and innovation solutions are top priority for RZD which is supporting the digitalisation, high-speed and driverless trains to develop its rail transport system.