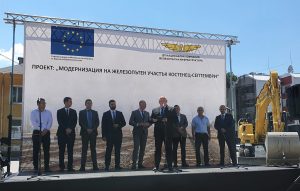 The Bulgarian Minister of Transport, Rossen Jeliazkov, and the director general of the National Railway Infrastructure (NRIC), Krasimir Papukchiyski, have inaugurated at Belovo railway station in Pazardzhik Province the construction works for the modernisation of Kostenets–Septemvri railway line.

The project involves the modernisation of 24.4 km of the double track electrified line, together with the bridges and tunnels, one underpass, three overpasses, and installation of signalling and telecommunication systems. According to the project, the modernisation excludes the tunnel 11 on the Kostenets-Belovo railway section.

The line is part of Sofia-Plovdiv mainline on the Orient-East Med Corridor.

The proiect “is a challenge to construct the link Sofia – Plovdiv lines in a short period and to add it to the almost completed railway line between Plovdiv and Bourgas, as well as to Svilengrad. Thus, the railway infrastructure will turn into the most comfortable, most environmentally friendly and most modern mode of transport for great part of the passengers and for freight,” the minister said.

The modernisation of Kostenets–Septemvri railway line has received European funding through the Connecting Europe Facility under the 2015 call. The project has a value of BGN 380 million (EUR 194.3 million). EUR 153.5 million was the total eligible costs, of which EUR 130.49 million are provided by the EU, covering 80% of the costs.

“The modernisation of this line is of strategic importance as the Sofia-Plovdiv railway line is among the most important railway connections in the country. It connects some of the largest industrial centers in Sofia, Plovdiv, Burgas, Stara Zagora and all of southeastern Bulgaria,” the director general of NRIC said.

The project, which is expected to be completed within 60 months (5 years) will allow passenger trains to run at speeds of 160 km/h and freight trains at 120 km/h.