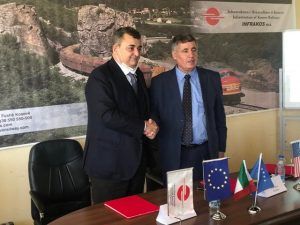 The CEO of Kosovo Railways Infrastructure, Infrakos, Zymer Zekaj and the President of Generale Costruzioni Ferroviarie (GCF), Edoardo Rossi, signed a EUR 48 milion contract for the modernisation and construction of the second track of Fushë Kosovë – Mitrovicë line.

The project involves the reconstruction of 148 km of rail line and 5 stations crossing the entire country from north to south. The works will be performed in compliance with the requirements of Technical Standards of Interoperability and European standards to enhance the safety of railway traffic, conditions for passengers, train speed, and the number of trains per day.

The signing of the contract “marks the continuation for realisation of railway line 10 rehabilitation which paves the way also for the third phase from Mitrovica to Leshak, and we hope together with the contractor that our objective will be realised as soon as possible in terms of time and quality as required by European standards, in order to get closer to Europe as soon as possible,” the CEO of Infrakos said.

Once complete, the project will allow for an increase in travel speed to 100 km/h and safe passenger and freight transport conditions. The project covers the installation of modern signalling and telecommunications, as well as electrification works. The project will increase the passenger and freight travel from 20 km/h to 100 km/h as well as freight axle load to 22.5 tonnes. It is expected that 1.2 million passengers and 1.2 million tonnes will use the line.

The project is funded by the Government of Kosovo through the loans from the Bank for Reconstruction and Development (EUR 8.6 million), the European Bank for Investments (EUR 20.7 million) with 50% co-financing and a 50% grant provided by the European Commission through the Western Balkans Investments Framework (WBIF), totalling EUR 18.14 million.

The Fushë Kosovë – Mitrovicë line is the central section of the Rail Route 10 in Kosovo which will be modernised and rehabilitated in three phases:

This Kosovë – Mitrovicë line project is one of the largest investments for the entire Rail Route 10 rehabilitation through Kosovo, from the border with the former Yugoslav Republic of Macedonia to that with Serbia.

Since 2019, GCF has been executing the first lot of works and completed by over 60% at the moment, under a EUR 78 million contract comprising the reconstruction of a 67 km line between Fushë Kosovë and Hani i Elezit, towards the Macedonian border.

The Government of Kosovo has made commitments to support the rehabilitation of existing lines and the possibility of opening the new railway corridors of the connection of Kosovo with Albania through Pristine – Durrës. The rail modernisation strategy will develop the connectivity and the economy of Kosovo and of the Balkan Region.