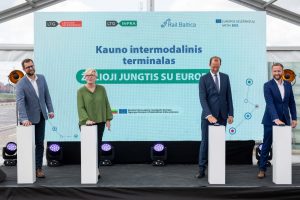 Ingrida Šimonytė, the Prime Minister of Lithuania, and Marius Skuodis, the Minister for Transport and Communications have officially opened to commercial traffic the Kaunas intermodal terminal (KIT).

It is the most easternmost point of the European railway system, which, after the completion of the Kaunas-Palemonas section on the Rail Baltica railway can be reached by European standard rolling stock.

On July 19, the officials inaugurated the first train from the Netherlands loaded with containers and semi-trailers, which arrived at the terminal by the European standard-gauge railway. LTG Cargo and PKP Cargo have started the intermodal freight transport from the Netherlands to Lithuania and vice versa.

The intermodal services are regularly provided since the route Kaldenkirchen-Šeštokai-Kaldenkirchen (3,000 km) was first successfully tested in May 2020. It was estimated that CO2 emissions during the test were lower by 100 tonnes compared to semi-trailers being transported using trailers.

“The opening of the Kaunas intermodal terminal for commercial traffic is an essential step in the Rail Baltica project in the transition from construction to transport operations. At the same time, this step will significantly improve the connections with Europe for freight carriers and expand the opportunities for sustainable transport in the Baltic region”, the Minister for Transport said.

Spring of 2019 was the starting point for modernisation of the Kaunas Railway Node to adjust it to the needs of the Rail Baltica and ensure compliance with the global project technical and operations parameters. During the modernisation project, a European standard railway was built through Kaunas to Palemonas, the historic Kaunas railway tunnel was modernised, four tunnels were installed, where cars and pedestrians could cross the railway safely, the city infrastructure next to the railway was arranged, and additional noise protection measures were installed.

The project has received European funding through the Connecting Europe Facility and is 85% funded by the EU Structural Funds. The continued support of the EU institutions for the project shows that Rail Baltica is more than a railway infrastructure – it is an economic corridor that promotes regional connections.

“The connection of the European-gauge railway to the KIT opens up additional opportunities for the development of ecological railway transport, thus reducing the CO2 emissions of trailers and freeing up motorways,” LTG Chief Executive Officer Mantas Bartuška said at the ceremony.

The terminal is prepared to load not only containers or other types of freight, but also truck trailers. Every year, 24 million tonnes of freight are transported by road via Polish-Lithuanian border.

“KIT is becoming an important gateway to Europe, opening up new opportunities for combined freight transport, freight can be reloaded from wide gauge to European and vice versa, as well as from trailers to rail and vice versa,” said Karolis Sankovskis, CEO of LTG Infra, which is responsible for the Rail Baltica and KIT construction woks.