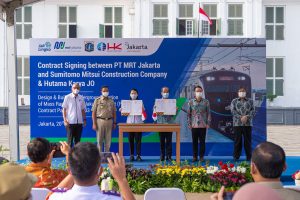 Anies Baswedan, the Governor of Jakarta, and the Japanese Ambassador to Indonesia Kanasugi Kenji attended the signing ceremony.

Under the CP203 contract package involving the first section, the consortium will construct a 1.4 km tunnel between Maaga Besar and Kota Tua and two underground stations (Glodok and Kota stations with 240 and 411 metres respectively).

Rp 4.6 trillion (USD 318.45 million) is the value of the contract under which the construction works will start in September and are expected to be completed in August 2027.

The MRT section will be integrated within the city’s structuring concept, prioritising pedestrian area arrangement and traffic engineering management.

The phase 2A involves a 6.3-km MRT line as part of the Bundarain HI – West Ancol corridor which will have a total length of 12.3 km expected to be operational by 2028. RP 32.5 trillion (USD 2.25 billion) is the estimated value of the project. The Jakarta MRT phase 2 was divided into two sections with the 2A section between Bundaran HI and Kota and the 2B section from Kota to West Ancol spanning 6 km.

“The construction of the Bundaran HI – Kota Tua line part of MRT Phase 2A will pay attention to the protection of cultural heritage sites while supporting the revitalization of areas with high historical and cultural value along the route in the context of urban regeneration. In line with the construction of 2A construction, MRT Jakarta system will also encourage the development of transit-oriented development (TOD) in the Thamrin, Harmoni, Sawah Besar, Mangga Besar, Glodok, and Kota areas through partnerships and collaboration with the community and various stakeholders, ” the President of PT MRT Jakarta William Sabandar said.

“We are preparing a connectivity route that will color Jakarta in the future. The construction of the MRT line is carried out in order to revive the Old City area. The Provincial Government is planning to build the entire region as an integrated regional unit with adequate intermodal connectivity, and involves various parties, such as the central government and DKI, elements of state and regional owned enterprises, as well as the private sector. All of that is in one consortium’s effort to build the Kota Tua area, so that this area will become part of Jakarta’s future,” the governor said.