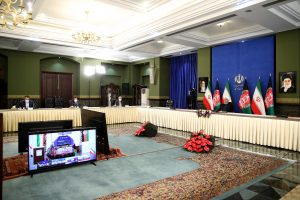 The President of Iran, Hassan Rouhani, and the President of Afghanistan, Ashraf Ghani, have officially inaugurated the Khaf-Herat railway line on December 10.

The line will be 225 km-long, of which the first 140 km-long section was opened. Iran has invested over USD 660 million for the completion of the project.

78 km of line are on the territory of Iran, from Khaf city to the Afghan border in Khorasan Razavi province. The 140 km rail connection runs from Khaf in northeastern Iran to Rozanak in the western Afghan province of Herat. The line is expected to be expanded by 85 km to Herat, in Afghanistan.

USD 75 million was the value of the investment to create the railway connection between the two countries.

“The opening of this historic project will be an important step in reviving and a leap in the cooperation between the two countries,” the President of Iran said. 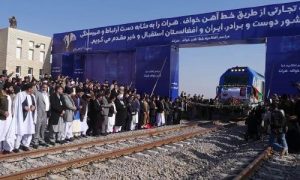 The line will significantly reduce transport costs, will remove the border bottlenecks, and will facilitate the freight transport and the development of the trade and economic relations between the two countries. “This railway will pave the way for the transit of goods for the people of Afghanistan,” Hassan Rouhani said.

The Khaf-Herat railway will contribute to the development and strengthening of economic, social and cultural relations between Iran and Afghanistan by facilitating the export and import of goods and the transport of passengers between the two countries. It will provide Afghanistan the rail access through Iran and further to the international market, including southern access to maritime transport including to Caucasus, Turkey, Iraq and Europe. The line is part of the East-West rail corridor linking the transport network of China to Europe, through Iran and Afghanistan.