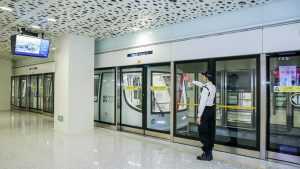 Shenzhen Innovia APM system has been opened on 17 December 2021 in the same day that the new satellite hall in Shenzhen Bao’an International Airport opened.

The APM system project was undertaken by Alstom’s Chinese joint venture CRRC Puzhen Bombardier Transportation Systems Limited (PBTS) since 2018 and in September this year, PBTS also won the contract to provide operation and maintenance (O&M) service for the APM system.

The Innovia APM system is equipped with the highest level of automation available (GoA4) to provide convenient transfer services between T3 and the satellite hall for domestic and foreign travelers.

The Shenzhen Bao’an International Airport is located on the east bank of the Pearl River approximately 32 km away from downtown Shenzhen. The Innovia APM system runs on a 2.6 km line connecting an air side satellite hall to Shenzhen Airport’s existing Terminal 3.

Operating at a maximum speed of 80 km/h, the travel time for passengers is 3 minutes. Shenzhen Bao’an International Airport has seen rapid passenger growth, surpassing 52 million passengers by the end of 2019, making it one of the busiest international airports in China. The satellite hall was designed to throughput 22 million passengers and will be an important structure to improve passenger capacity.