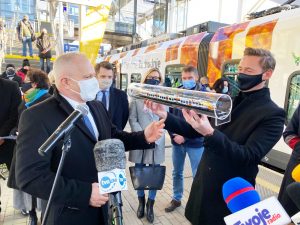 The first two hybrid trains ordered by West Pomeranian Voivodeship and manufactured by Newag have been presented at the Szczecin Main Railway Station on January 21.

The event was attended by the Marshal of the West Pomeranian Voivodeship Olgierd Geblewicz, the Deputy Marshal of the Province, Tomasz Sobieraj, the Director of the Infrastructure and Transport Department Jadwiga Rajkiewicz and the President of Newag, Zbigniew Konieczek.

The first train was painted in amber colour, while second one, in green highlighting the sustainable activities implemented by the management of the voivodeship.

“These first two hybrid trains which enter West Pomeranian railway infrastructure are the result of our vision to become the most environmentally friendly voivodeship in Poland. The tracks are not electrified everywhere in Poland, and thanks to these two-drive trains, we will be able to travel wherever possible with an electric drive, and where necessary, we will move with a combustion engine. You will be able to travel them comfortably, but at the same time ecologically. I am convinced that these two trains will fantastically serve our residents, tourists and the natural environment,” Olgierd Geblewicz said at the ceremony. 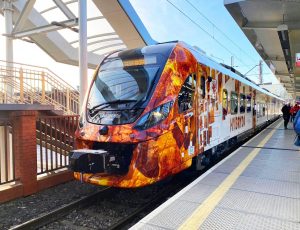 Hybrid Impuls train has a capacity of 302 passengers, including 150 seated. During its design, special attention was paid to the safety and comfort of travel. The passenger compartment is equipped with a fire extinguishing system, information system for travelers, GPS monitoring system, as well as comfortable seats and luggage racks. Additionally, the vehicle has built-in bike hangers and ramps for the passengers with disabilities. The 36WEh vehicle reaches a speed of 160 km/h in electric mode and 120 km/h in diesel mode.

The innovative hybrid Impuls 2 type 36WEh multiple unit is the first Polish rail vehicle that, in addition to electric motors, also has diesel engines, that allow to operate on non-electrified railway sections. Thanks to the use of innovative technologies in Impuls 2 the functionality and scope of its use by carriers have dramatically increased, and in addition, passengers’ comfort of travelling is also dramatically increased. 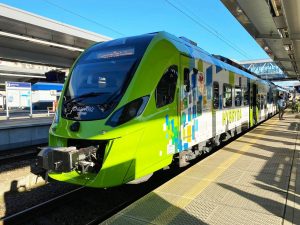 Western Pomerania region owns the largest number of Impuls EMUs. From 2013 to 2018, the fleet of rail vehicles owned by the province was expanded by 40 EMUs of the Impuls family, out of which 22 EZT Impuls type 31WE EMUs and 18 EMUs of type 36WE. Therefore, the region became the most developed in terms of the new fleet of rail vehicles, as well as in terms of ensuring the fleet’s integration.

Now, the West Pomerania is the first Polish region that has ordered hybrid trains.

The value of the basic order is PLN 40 million (EUR 8.83 million). It is possible to exercise the option for 10 additional hybrid vehicles worth PLN 200 million (EUR 44.15 million).