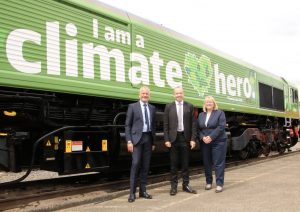 The train, named ‘I’m a climate hero’, was tested at the company’s load bank facility at Toton traction maintenance depot in Nottinghamshire where traditional red diesel has been substituted for the more environmentally-friendly HVO fuel.

A Class 67 diesel locomotive has been put through its paces from idling to full power with monitoring showing no adverse impact on the performance of the locomotive’s powerful 3,200bhp engine. DB Cargo plans to move to live, on-track testing of the HVO fuel in both its Class 67 and 66 freight fleet. Tests are also planned for the company’s fleet of Class 60 locomotives.

It’s synthetically made through the hydro-treatment process from vegetable oils or animal fats which significantly reduces harmful carbon dioxide (CO2) and nitrogen oxide (NOx) emissions when used in diesel vehicles and machinery.

“As the UK’s largest provider of rail logistic solutions operating the largest fleet of locomotives, we have a responsibility to our customers and to society in general to continuously look for more sustainable ways of operating and minimise our impact on the environment,” DB Cargo CEO Andrea Rossi said.

The innovative vehicle is an important step in the transition towards the UK Government’s goal of net zero by 2050 and it highlights the important role that rail freight can play as part of the Department for Transport’s aims to make transport greener.

“We are boosting British business while cutting carbon. This is what building back greener is all about. Trains are one of the most eco-friendly ways to transport goods and, through ingenuity and innovation, DB Cargo are leading the way in making it even greener,” Rail Minister Chris Heaton-Harris said.

DB Cargo is the largest rail freight operating company in the UK and has been trialling and expanding its use of HVO as a way to reduce carbon emissions in the short term. This new service using HVO will transport Toyotas built in Derby to continental Europe through the Channel Tunnel and import Toyotas on its return leg.

The HVO locomotive can cut carbon emissions by up to 90% compared to diesel vehicles. DB Cargo UK currently operates 228 diesel and electric locomotives that transport in the region of 37 million tonnes of freight each year across the UK and into Europe. It uses approximately 45 million litres of red diesel a year.