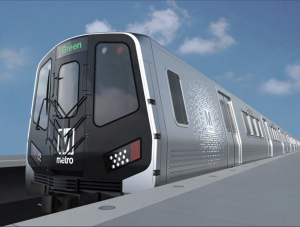 Washington Metropolitan Area Transit Authority (Metro) awarded Hitachi Rail a contract of up to USD 2.2 billion to design and build 256 of the 8000–series metro cars. The Request for Proposals were issued in September 2018. The contract includes options, if exercised, to build up to 800 vehicles. The initial pilot vehicles are expected to be delivered in 2024.

The new 8000–series railcars are designed to be lighter, safer and more energy-efficient with improved regenerative braking technology, ventilation system improvements, high–definition camera system and stringent cybersecurity requirements to enhance security. Metro and Hitachi Rail share a commitment to sustainability, and this is applicable for the new model.

“We are excited about this critical investment in safe and reliable railcars and service for Metro customers, made possible through the region’s dedicated funding commitment. The capital investments we are making in our transit system also support our businesses, our environment, and our quality of life in the national capital region,” Chairman of the Board Paul Smedberg said.

Hitachi Rail will manufacture the carbody structure, perform the equipment installation and will do the final assembly of the new metro cars in the Metro region, creating new skilled trades jobs in the local region. The manufacturer owns East and West Coast U.S. railcar assembly plants as well as a manufacturing plant dedicated to signalling solutions.

The new railcars are funded using new dedicated revenue streams established by the District of Columbia, Maryland, and Virginia. In recognition of the region’s commitment to Metro’s long-term future, Metro structured the procurement process to encourage reinvestment of local tax dollars in the regional economy. Hitachi is exploring sites in the region with plans to add an assembly plant for the 8000-series railcars that will result in direct and indirect local jobs and return Metro’s investment to the local economy. With many partnerships, Hitachi Rail’s assembly plants are serving customers in Baltimore, Honolulu, and Miami.

“For Hitachi Rail, our company’s business growth translates to direct and indirect U.S. jobs. Further capital investments in assembly and manufacturing in the region will supply the growing U.S. rail market to meet increasing demand. We also believe that our downstream supply chain offers considerable opportunities for the participation of diverse business enterprises. We value diversity in the workplace and the marketplace,” Andrew Barr, the CEO of Hitachi Rail Group said.

While there are no U.S. manufacturers of passenger rail cars, Metro included aggressive goals in its request for proposal to ensure investment in local vendors.

The Metro’s 8000–series railcars will improve upon the design and features of the new fleet of 7000–series cars, the most reliable in authority’s history. The new metro cars will replace the aging 2000- and 3000-series railcars, which have been in service since the early 1980s.

“The 8000-series railcars will modernise the Metro fleet with Hitachi building on the success of the newest 7000-series cars to provide reliable, comfortable and safe transportation for our region and contribute to the local economy,” Metro General Manager, Paul Wiedefeld said.