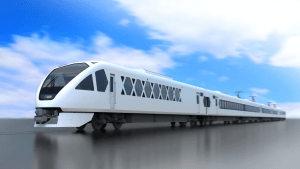 Tobu Railway awarded Hitachi Ltd. a contract to supply a new fleet of “Limited” N100 express trains for its flagship transport service between Tokyo and renowned Nikko and Kinugawa. The first electric multiple unit of N100 series will be put in operation in 2023 on the Tobu Skytree Line (41 km), Nikko Line (94.5 km), and on Kinugawa route (16 km).

N100’s exterior drew inspiration from the heart-warming design of Japanese traditional crafts, and the coloring comes from the noble white of Nikko Toshogu Shrine. While inheriting the comfortable large swivel recliner seats and compartment rooms of Spacia series, N100 newly provides lounge sheets and cafe counter to meet the diverse needs of all passengers.

“We are proud to design and build Tobu’s flagship express trains that will improve the service for the millions of passengers who visit Nikko and Kinugawa every year. Hitachi has built over 500 commuter cars of A-train for Tobu. We will work with Tobu to build a fleet of modern trains that are safe, comfortable environmentally friendly and pleasant,” Koji Agatsuma, Group COO (Rolling Stock) at Hitachi Rail said.

The new EMUs which will be powered by renewable energy will reduce the CO2 emissions by up to 40 per cent compared to the current Spacia existing fleet.

The trains will be built at Hitachi Rail’s Kasado Works plant in Kudamatsu City, Yamaguchi Prefecture in Japan. The plant develops and manufactures railway and Shinkansen trains that feature lightweight aluminum raw materials.

The popular tourist destination, which includes natural beauty spots and the Nikko Toshogu shrine, World heritage site dedicated to one of Japan’s most famous shoguns, attracts up to 12 million visitors each year. The new N100 express trains will improve the service from the Japanese capital and tourist spot and replace the previous Spacia 100 series, which have been operating since 1990.