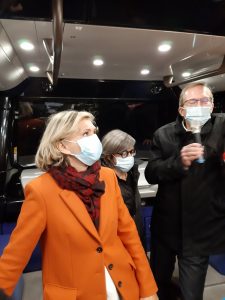 Valérie Pécresse, the President of the Île-de-France Region and of Île-de-France Mobilités, Catherine Guillouard, the CEO of RATP, and Henri Poupart-Lafarge, Chairman and CEO of Alstom attended the official ceremony.

“We are proud to see the MP14 metro train running in Île-de-France after having designed and manufactured it in our centre of metro excellence in Valenciennes, with the contribution of seven other Alstom sites in France for the components. A project like MP14 will make it possible to ensure production at eight Alstom sites in France and its suppliers until around 2026,” said Henri Poupart-Lafarge.

The train is made of up to eight cars and is designed to improve passenger experience while reconciling performance, energy efficiency and ease of maintenance, in order to keep costs under control throughout its lifecycle.

The automated metro train offers an unprecedented level of comfort and safety thanks to its interior layout and seats with a design based on the theme of the alcove, creating both conviviality and privacy. The train has 48 spaces for people with reduced mobility and 2 spaces for people in wheelchairs. 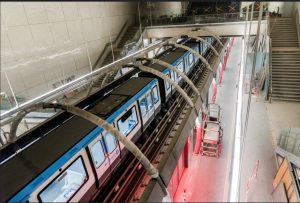 The MP14 rubber-tyred metro train has vast reception areas providing passengers increased accessibility with dedicated areas and boomerang-shaped seats to improve the fluidity and capacity of the trains. MP14 also has LED lighting efficiently distributed throughout the entire metro to provide a sense of security and banish all areas of shadow.

The supports and steadying points are compliant with standards and increase comfort inside the train. Warm and cool ventilation helps to provide a sense of wellbeing, whatever the season. The train is equipped with comprehensive video protection system and dynamic passenger information on board. The design of this new metro is underlined by signature lighting on the front end of the train.

MP14’s 100% electrical braking system recuperates energy and re-injects it into the network as electricity, while limiting the emission of fine particles caused by the mechanical brakes. The system reduces the energy consumption of the metros, as well as air pollution, by up to 20%, compared to the MP05 metros.

MP14 is also 40% quieter (-2 dB) with a 95% recyclability rate. The interior layouts are modular, and it can be modified over time, enabling maintenance throughout its lifespan. 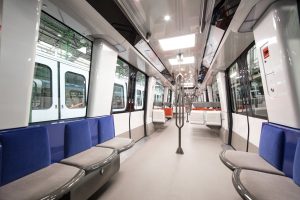 20 eight-car automated metros destined for line 14 will be supplied in 2021 and within the next four years, 72 new trainsets will be delivered to operate the Line 14 extension. They will increase the daily ridership from 500,000 passengers to 1 million passengers by 2024 on this busiest Paris metro line.

Île-de-France Mobilités invests EUR 2 billion for the procurement of 217 trains   of which 112 are already contracted.