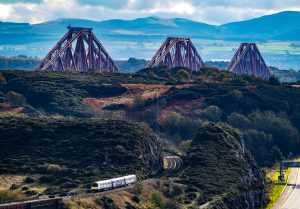 Network Rail is highlighting rail’s role for transport decarbonisation during Green Trains event in the framework of COP26 in Glasgow.

As part of COP26, Network Rail is demonstrating its commitment to decarbonising Britain’s railway and supporting the UK and Scottish Governments’ net-zero goals with a showcase of two green technologies which are vital to rail’s part in tackling climate change.

Two innovative new trains will run during the conference of the Britain ail infrastructure manager showcasing the range of green ways to power trains including batteries, hydrogen and electricity.

These technologies have been identified as important elements of plans to make rail even greener, as highlighted in Network Rail’s interim Traction Decarbonisation Network Strategy.

British company Vivarail has designed and manufactured pure battery and battery hybrid trains, as well as innovative charging technology, and their next generation train is capable of achieving a range of up to 100 km and recharges in only 10 minutes.

The flexibility of batteries means this package can be used to repurpose good quality diesel units or added to other types of electric train so that they’re capable of travelling on parts of the network not yet electrified.

During the event, Network Rail and Vivarail presented the first emission-free fully electric train which crossed the iconic Forth Bridge which cannot have overhead electric lines installed because of the height restrictions, so trains need to have an independent source of power to travel across.

Vivarail has used its Class 230 trains to prove the concept. The battery traction and charging package can be used on other trains with a higher speed, opening up new swathes of the network. The Class 230 trains are ideal for branch lines and shuttle services. Battery technology has a wider application and Vivarail is excited to talk about that on its daily showcase services throughout COP26.

In June, Network Rail and Porterbrook announced their intention to present the HydroFlex train during the United Nations Climate Change Conference.

At COP26 in Glasgow, around 120 leaders came together launching two weeks of global negotiations and to avoid the climate change. COP26 brings the major emitting countries face to face with the countries most vulnerable to climate change. The World Leaders Summit will send a clear signal to negotiators to be as ambitious as possible and agree to a negotiated outcome that accelerates action this decade.