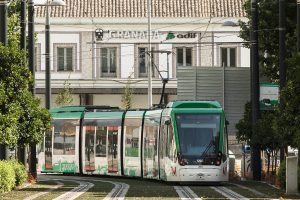 Metro de Granada awarded CAF a contract to supply 8 vehicles for the city’s network, which will be added to the 15 previously delivered units which are currently in service.

CAF will deliver the new trains within 22 months and the contract also includes the testing phase of each of these new trains.

The contract is fully financed by the React EU funds for Recovery Assistance for Cohesion and the Territories of Europe.

The new trains are providing places for 221 passengers and are able to run at a maximum speed of 70 km/h.

In February Metro de Granada announced that CAF was the single bidder to deliver 8 new trains with a base tender budget of EUR 43.87 million. When the new trains will be delivered, Granada will benefit a renewed fleet of 23 units.

The train procurement will meet the growth in metro passenger demand, whilst also significantly improving service quality. The new trains will provide a significant increase in transport capacity allowing Granada Metro to offer 40% more seats, as well as an increased frequency of the trains to 6 minutes from currently an 8-minute interval. The Public Works Agency contracted Ineco to develop a study for the improvement of the commercial speed, which could even optimise that target interval oftrains pass every six minutes at rush hour.

The increase in the capacity of seats offered, taking into account seated and standing passengers, will go from a maximum of 3,315 passengers to 4,641 passengers with 21 vehicles in service. Two units must in workshops and depots to deal with possible incidents of fleet, so that reliability in terms of train availability is also strengthened. Following the delivery of the new trains, Granada will benefit a train fleet of 23 units from CAF.

This extension of the train fleet is intended to significantly increase transport capacity by increasing the number of seats available, as well as train frequency at stations. It will also make it possible to run double-train consists during peak demand times and for special, high-intensity services. This rolling stock extension will allow the company to cover the first planned expansions of the Granada Metro network which already has Next Generation funds, from the EU Recovery, Transformation and Resilience Plan.

Three extensions which are defined by a study are currently in the public information phase and are also outlined in the next phase of their planning, since there are already contracts in execution for the drafting of the projects for the construction of the South and North extensions.

In 2021, Sener, in consortium with ARCS Estudios y Servicios Técnicos, won a contract to develop the detailed design for the northern extension which will start in Albolote, the northern terminus of the existing line, towards the municipality of Atarfe.

The southern extension covers the construction of a 6 km line with six stops between Armilla, Churriana de la Vega and Las Gabias. The project has received a EUR 108 million funding from the European Union and is expected to enter services in 2026.

In October the drafting of the construction project of the Centre extension was put out to tender. The 3.5 km extension with seven stops will be constructed between Caleta and Hípica through Avenida de la Constitución, Gran Vía, Reyes Católicos, Manuel de Góngora and Andrés Segovia.