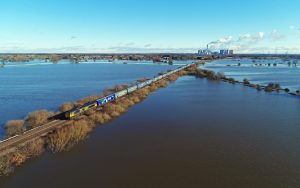 Drax, a British electrical power generation company, has signed two contracts to transport sustainable biomass from UK ports to its power station in Selby, Yorkshire, which is the UK’s largest power station.

Drax and GB Railfreight (GBRf) have agreed a five-year extension contract which will run until 2025 for sustainable biomass transport services.

Under the contract, GB Railfreight will run all of Drax tonnage from the Ports of Tyne and Liverpool to Drax power station.

The two companies have worked closely in the past decade to maintain the supplies of the biomass needed for the power station to continue generating the flexible and reliable renewable power for millions of UK homes and businesses.

GBRf is offering Drax transport services since 2010 when the railway freight operator began moving biomass from the Port of Tyne. Originally, GBRf used wagons that had been converted from coal hoppers by adding lids and these remain in use under the new contract. As Drax converted more of its coal units at the power station to sustainable biomass, Drax invested in new purpose-built biomass wagons that are larger and therefore more efficient at carrying the pellets.

With DB Cargo UK, Drax has also signed a contract for a five-year extension of rail transport services. DB Cargo will operate an average of 60 trains per week from the ports of Immingham and Hull to the power station. Each DB Cargo train will carry a volume of around 1,650 tonnes to the station.

Drax supplies 12% of the UK’s renewable electricity. Using sustainable biomass instead of coal at Drax Power Station has reduced emissions by more than 80% and helped the UK power system decarbonise faster than any other country.

The contracts are vital to Drax’s global biomass supply chain and another step on its journey to negative emissions.

“These rail deliveries are a critical part of our global supply chain for sustainable biomass that supports thousands of jobs and has delivered economic growth across the north of England, while supplying renewable electricity to millions of homes and businesses,” Mike Maudsley, UK Portfolio Generation Director at Drax, said.