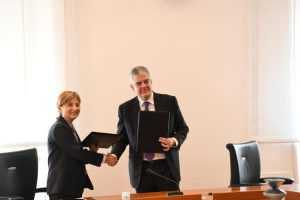 The EIB Vice-President Gelsomina Vigliotti and the CEO of FS Italiane Luigi Ferraris signed a green bond agreement which will be used by Trenitalia to purchase high-speed trains for Italian and Spanish railway lines.

The subscriptions of Ferrovie dello Stato Italiane bonds worth up to EUR 550 million approved by the EU bank, of which a tranche of EUR 350 million signed on December 16.

The amount will be delivered for the procurement of 34 high-speed trains, 20 of which will be leased to Ilsa, its Spanish subsidiary, to be used on the Madrid-Seville-Malaga, Madrid-Barcelona and Madrid-Valencia-Alicante high-speed lines in Spain. EUR 1.2 billion is the total value of the new trains.

The new trains estimated at EUR 1.2 billion will be used to provide transport services in Spain and Italy.

The remaining 14 trains will be managed by Trenitalia and will be used on the Turin-Trieste and Milan-Naples-Salerno-Reggio Calabria lines.

The project will enable Trenitalia to modernise its existing fleet for the Italian lines and, at the same time, increase the competitiveness and expansion of the Italian group in the high-speed sector outside Italy.

“Strengthening the single market by stepping up efforts and investments to complete the trans-European transport network and support the transformation of mobility towards a low-carbon future is one of the key objectives of the EIB. Thanks to this operation, FS will be able to modernise its existing fleets in Italy and expand its business in Spain, increasing competitiveness in the high-speed and sustainable transport sector,” EIB Vice-President Gelsomina Vigliotti said.

This is the EIB’s first subscription of a green bond and therefore the first operation under the Green Bond Purchase Programme, which was approved by the EIB Group at the end of May 2021 and is line with best practices and the EU taxonomy. FS Italiane also received an opinion from Sustainalytics that certified its greenness and for the first time the compliance of its eligible green projects with EU guidelines, thus confirming FS as a virtuous green issuer on the European market.

The FS Group is becoming the first European company to benefit from the facility, confirming the shared commitment of FS and the EIB to sustainable green finance

“I am very pleased with this further green bond issue aimed at strengthening the fleet of high-speed trains in Italy and Europe. It is a source of pride for the FS Group to be the first to receive financing from the EIB which, in signing this tranche, has underscored our commitment to increasingly sustainable mobility,” the CEO of FS said.