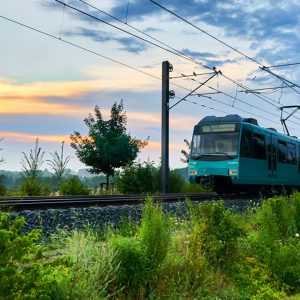 The public transport of Frankfurt, VGF, awarded Siemens Mobility a contract to replace the conventional train control system currently used in its metro and tram network with a new, digital train control (DTC) system, one of company’s most important projects for the future.

“The digitalisation of the train control system with the DTC is a project that will not only have outstanding importance for Frankfurt’s public transport network in the coming years but will also make the city and the VGF leaders nationwide. The DTC will mark the first time a Communication Based Train Control System (CBTC) is used in a German city,” Frankfurt’s Cabinet Member for Transport Stefan Majer said.

The technology will wirelessly and digitally link metros and trams with one another in real time. This will allow trains to operate at shorter intervals and, in turn, enable the VGF to significantly expand its capacity without having to convert or build new rail lines or stations.

Under the project, all nine lines of Frankfurt’s metro system are to be converted to digital train control by 2031. The conversion will begin with the “B route” (lines U4 and U5), including the U5 extension to the Europaviertel, and is currently planned to begin operation in 2025.

In addition to data transmission which makes possible to dispense with conventional signals, reducing the maintenance costs, VGF can use the digital train control system to increase the capacity and efficiency of its routes, particularly in the underground sections.

Through this project, VGF will increase the capacity by up to 25 per cent on the “A route”, served by Lines U1, U2, U3 and U8, without having to expand or construct new lines, which is not only expensive and often draws protests, but also takes considerable time.

The CBTC project not only allow more trains to operate on a route, but also ensures greater punctuality and reliability. The system enables more energy-efficient driving with savings up to 20 per cent possible and provides greater passenger comfort through gentler acceleration and braking. This, in turn, also reduces wear and tear on both trains and rails.

For the implementation of the digital train control project on December 13 the Hessian Minister for Economic Affairs, Energy, Transport and Housing, Tarek Al-Wazir officially granted a EUR 95.5 million funding to the VGF which will also receive financing from the Federal Government and the state of Hesse.