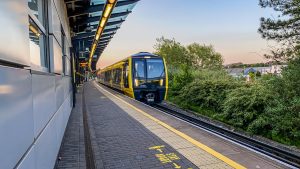 Stadler handed over to Liverpool City Region the first Merseyrail train which will operated the city’s suburban rail network.

The new train will go on public display for the first time later this month.

This is a significant milestone in the new trains project that will see the entire fleet replaced by state-of-the-art, safe, reliable, comfortable trains, set to bring the city region’s rail service into the 21st century.

The new vehicles will be “the greenest and most accessible trains in the country and, best of all they’re owned by us. We’ve designed them around the needs of local residents, who I’m sure will all absolutely love them,” Steve Rotheram, Metro Mayor of the Liverpool City Region said.

The handover comes after a comprehensive programme of testing and the authorisation from the UK rail regulator, the Office of Rail and Road, secured this summer.
Over the coming months, Stadler will hand more trains to the Combined Authority, ahead of introduction into passenger service.

The Merseyrail train was co-designed in consultation with local people and benefit a wide range of customer-focused features and functions including pioneering sliding-step technology, providing step free access for all, on board Wi-Fi, as well as improved passenger information screens. The new trains provide more space for wheelchairs, bicycles and prams.

In July, Stadler successfully completed the trials for its newly built battery train paving the way to the potential expansion of the Merseyrail network.

In 2017, Stadler and Merseytravel signed a GBP 700 million (EUR 815.8 million) contract to build and maintain 52 four-car trains with an option for 60 vehicles for Merseyrail network, which will replace one of the oldest train fleets in the UK.

The low-floor trains are entirely walk-through, increasing their capacity to 486 passengers, of which 182 seated, 302 standing, and two wheelchair users.