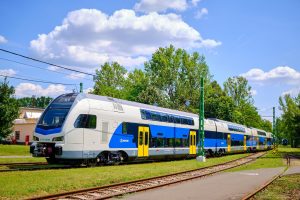 EUR 318 million is the total value of the project which involves the procurement of 21 double – decker electric multiple units to be used for regional rail connections in Hungary.

The EIB financing will support the contract signed in January with Stadler. Under a EUR 313 million contract, the rolling stock manufacturer will deliver 21 Kiss electric multiple units. In 2017, MAV-Start and Stadler signed a framework agreement for the supply of a total fleet of 40 double – decker trains and with this third order, the Hungarian rail passenger operator has exercised the options included in the agreement. It involved the delivery of 40 Kiss EMUs with the first order for 11 trains, and the second for the additional 8 trains concluded in December 2018.

According to the delivery schedule of the contract, the 40th unit, which is the last train of the third batch, has to be delivered by the end of 2022.

The new Kiss EMUs will be 155.88-metre-long, 2.8 metre wide and 4.6 metre high. They will consist of six coaches providing 600 comfortable seats, a 50% increased capacity compared to the single – decker unit with the same length. The trains will have multifunctional areas providing plenty of space for four wheelchairs, as well as twelve bicycles or five strollers. The trains will be equipped with four toilets, one of them being accessible for persons with reduced mobility.

The new vehicles, which have been designed according to the latest safety standards, will be equipped with EVM and ETCS Level 2 train control systems, making them able to run at a top speed of 160 km/h on the modernised railway lines of Hungary.

MAV-Start rolling stock procurement will increase the quality of rail services provided in Hungary and will promote the travel by rail, reducing the use of private vehicles and the associated negative impacts on the local environment, and road safety and greenhouse gas (GHG) emissions.