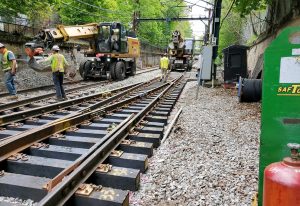 The authority is implementing an acceleration concept to fully advance the works, which was also used for the 2021 track and intersection upgrade on the Green Line allowing fast works for 14 intersections representing 26 per cent of the line, on the B, C, and E branches. This accelerated approach was also used in 2020 when line’s transformation programme completed four weeks of full access improvements on the E Branch, primarily from Northeastern University to Brigham Circle.

Through this approach, MBTA has completed critical work on E Branch during the month-long closure resulting in one year schedule saving, and a 30 per cent construction cost reduction

“Following last summer’s acceleration, we’re returning to the E Branch this August to continue accelerated work on the Green Line. Performing this work during 28 consecutive days means delivering benefits to our Green Line riders much sooner than if the work was performed during evening and weekend diversions alone,” MBTA General Manager Steve Poftak said.

During the acceleration, there will be lane closures, and some parking spaces will be temporarily unavailable in the work zone. These restrictions are required for storing materials and safely accessing the tracks.

The project is part of the Green Line transformation programme which includes track replacement and modernisation, accessibility and capacity improvement, and rolling stock replacement.

The programme is carried out under the USD 8 billion five-year capital investment plan. The MBTA has significantly increased its capital investments. In the Fiscal Year 2021, the MBTA has achieved its capital spending goal of USD 1.75 billion, which includes USD 1.3 billion for reliability and modernisation investments alone, which is an 8.7% increase over capital spending during Fiscal Year 2020.

In addition, the MBTA has increased its annual capital programme investments from approximately USD 768 million during Fiscal Year 2015 to an expected USD2 billion in spending for Fiscal Year 2022.