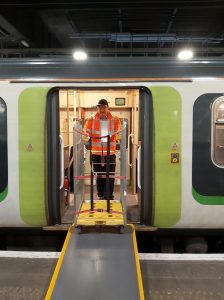 GB Railfreight has successfully completed a trial using a former commuter train for the express delivery of parcels for vital NHS supplies. A service was run into Euston station, using a Class 319 EMU train able for speeds of 160 km/h. Until recently, the train was used to provide commuter services in the West Midlands.

“We are committed to continuing to help the UK get through this period by ensuring that vital supplies are delivered. Rail freight has the advantage in being able to efficiently move very large volumes of goods in a safe and reliable way,” John Smith, Managing Director of GB Railfreight said.

The trial showed the trains could successfully be loaded and offloaded with standard roll cages at most mainline stations across the UK and when seats are removed the carriages can carry significant volumes of parcels.

This is the first time that successful trial of using a converted commuter train has been undertaken in the UK and GB Railfreight is in discussion with Government about how the service could play a role in helping with the logistical challenge of delivering vital NHS supplies.

The railway network used to be extensively used for parcel deliveries between stations, but apart from specially designed trains used by the Royal Mail between dedicated terminals, parcel delivery by train disappeared decades ago.

As well as strengthening supply chains during the current crisis, a return of parcel delivery services to mainline stations would provide online retailers with a more sustainable and reliable options for overnight parcel deliveries, bringing deliveries into the heart of major cities.

“This successful trial shows how the railways can play their role in helping the speedy delivery of vital supplies and we are keen to be able to do our bit to help the NHS meet the logistical challenge of keeping our hospitals supplied during this period of huge demand,” Smith explained.

These services will play a key role after the crisis, making a huge contribution to reduce air pollution and carbon emissions.