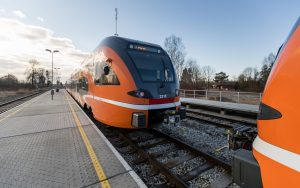 The project is part of country’s plan to electrify its railway network.

The joint venture’s proposal will take into account all relevant aspects needed to properly electrify the railway network. The solution will include the specific overhead catenary system (OCS system) and traction substations to be implemented, apart from Esti Raudtee corresponding connection parameters to correctly supply electric energy to the entire railway network.

As part of the contract, Ardauy and Ayesa will design an electrification solution based on an operating voltage of 25kVac.

The works being carried out by the joint venture will modernise the network’s connection and provide Estonia with electrified rail for the whole country. The ultimate goal of this project is to ensure that the current and future transport needs for both passenger and freight traffic are successfully met. The electrification will help to contribute to an Estonian railway system which is more sustainable not only from an economic point of view, but from an environmental and social one as well.

Currently, the electrified rail network in Estonia stretches from the Northeastern area of Harju County, which spans 225 km, to the Western part of the country where the capital, Tallin, is located. The electrified railway lines currently in operation run on 3 kVdc.

Estonia has set a goal of covering approximately 14% of the transpor’s sectors energy use from renewable sources by 2030. One third of this capacity is planned to be covered by increased electric rail traffic volumes. The expansion of the electric railway calls for significant extension of relevant contact network. Esti Raudtee previously announced that the electrification design contract for the first sections of the electric railway start in 2020 and relevant implementation will be carried out in until 2028.