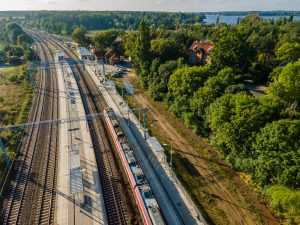 The European Investment Bank has launched the Green Rail investment Platform to assist public and private investments in rail projects. The announcement came in the same day the European Commission unveiled the new plan to develop the rail passenger transport sector.

To fast track the implementation of rail investments, the new platform offers the lending, blending and advisory services of the EIB and the EU financial instruments available under InvestEU.

The new funding tool is available to all rail operators, infrastructure managers, transport authorities and other stakeholders.

“Rail transport will be the backbone of Europe’s future climate-neutral transport system. It is the only mode of transport that has reduced its emissions and energy consumption since 1990. That is why investing in rail is a top priority for the EIB. The new Green Rail Investment Platform will help the rail sector to access EU investment financing and advisory support more easily,” EIB Vice-President Kris Peeters said.

The platform will support the rail sector to recover from the pandemic impact and will boost the investments which rail sector needs. It also aims at financing of investments due to addressing decarbonisation challenges by expanding electrification and introducing new technologies.

The investment of the European Investment Bank in lower-carbon transport which includes rail, metro, tramways and alternative fuels, has been increased from EUR 6.7 billion in 2019 to EUR 7.2 billion in 2020, an increase of almost 10%.

In the last decade, the bank has provided more than EUR 40 billion to support the development of the rail sector. For the rolling stock modernisation and procurement, the EIB’s rail portfolio has increased its financing from 30% in 2017 to 60% in 2020. The EIB is now focusing on financing projects that are in line with climate action targets, such as electric rail rolling stock and other zero emission trains such as those powered by hydrogen and batteries, as well as rail infrastructure and intermodal terminals.