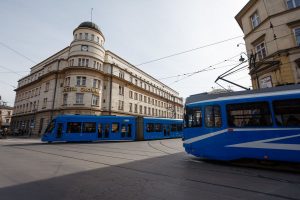 The European Investment Bank approved a PLN 150 million (EUR 34 million) loan for Krakow PPP tram project which includes the construction of a 4.5 km double-track tram extension from Meissner to the northern District of Mistrzejowice.

PLN 395 million (EUR 88 million) is the total value of the project which will connect the existing tramway network from the central District of Czyzyny with Mistrzejowice. The new line will start at the junction of the streets of Jana Pawła II, Mogilska, Lema and Meissnera, corssing through the streets of Bohomolca and Kazimierza Jancarza, up to the existing tramway node of Mistrzejowice.

The investment is performed under a PPP contract with a private partner, which will involve the joint performance of the project base on the division of tasks and risks between the parties.

The private partner will be obliged to finance the construction, reconstruction of road infrastructure and its ongoing maintenance within the scope specified in the contract. The public entity will pay out a remuneration to the private partner for performing the task in the form of the so-called “availability fee”.  Road Administration Authority of the City of Cracow

PLN 400 million (EUR 90 million) is the estimated value of the project and the amount covers the tasks with the potential financing from the EU Funds of PLN 136 million (EUR 30.6 million).
The Krakow PPP tram project was prepared by the Road Administration Authority of the City of Krakow and it was submitted to the Ministry of Development Funds and Regional Policy under an open call for PPP investments in 2016. The support took the form of complex advisory including legal, economic and financial and technical aspects for the preparation of the investment under the PPP formula.

In June 2019, the City of Krakow announced that seven companies submitted an application for participation in the competitive process for the construction of the tram line to Mistrzejowice. Three of the companies have been selected for the negociation process which was set for the evaluation with a maximum 25 points.

The negotiations with the three selected teams, which formed the basis for the essential terms of the contract, have been completed at the beginning of 2020.  Technical, financial and legal issues were discussed before submitted the final bids.

Krakow has completed a competitive dialogue with three entities on the construction and maintenance of a 4.5-kilometer tram route from Meissner to Mistrzejowice. Now companies will be invited to submit bids. The investment is being implemented as a pilot in the public-private partnership formula.

The winner for the design, construction and operation of the new line will be announced by the end of 2020. It is expected that the decision on the road investment permit (ZRID) will be issued in the second quarter of 2022 and the line would enter operation in the first quarter of 2024. The PPP contract is to be signed for a period of 24 years, with 1.5 years for the design, 2 years for the construction works and 20 years of maintenance of the infrastructure performed by the selected private partner.  The PPP contract will end in 2044.