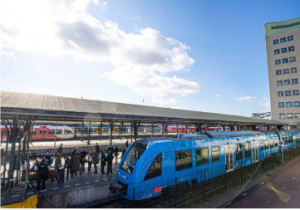 The European Investment Bank has approved a EUR 25 million finance for Groningen Province to acquire hydrogen-powered trains to provide regional rail services in North Netherlands area and for the installation of one refuelling station. EUR 66 million is the estimated value of the project evaluated by the bank.

The project consists of the acquisition of four hydrogen trains to provide regional rail services on  the Northern Lines that cover the provinces of Groningen and Friesland and the installation of one refuelling station that will serve these trains, as well as in the future a possible extension for road vehicles and barges.

The new rolling stock will provide additional capacity to run services on non-electrified railway network in the north of the Netherlands, including a small new extension from Veendam to Stadskanaal.

The project is also the first milestone of a wider ambition to decarbonise transport in the region by replacing all existing diesel trains under this PSO with hydrogen trains.

The Groningen province intends to put into commercial services new hydrogen trains by 2024, which are scheduled to operate the Wunderline, the rail connection between the Northern Netherlands and Northern Germany, linking the cities of Groningen and Bremen.
In 2020, the railway infrastructure manager, ProRail, and the Dutch province performed a trial with Coradia iLint train on the 65 km Groningen – Leeuwarden railway line.

According to the report published by the Province of Groningen that took into account the Coradia iLint tests, the train has successfully met the four objectives set by authorities to see the feasibility of the introduction of hydrogen-powered trains. The report underlined that the train met all the criteria which include the authorisation released by the National Safety Assessor, fully zero emission, perfectly fitting the transport services, quick and easy refuelling, and familiarisation of the public to hydrogen mobility.