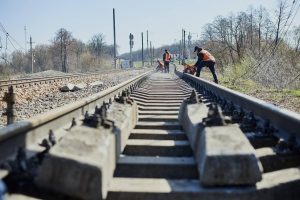 The European Commission adopted a decision to sign by the end of May a high-level agreement with Ukraine updating the TEN-T indicative maps with plans covering the construction of standard-gauge cross-border rail lines.

The European Commission is in the process of identifying common infrastructure priorities and increasing interoperability between the Union TEN-T and Ukrainian infrastructure including the construction of standard-gauge lines in the border regions of Ukraine and Moldova both currently use a wider gauge than the neighbouring countries.

The Commission says that it would support the projects by providing financing through the Connecting Europe Facility which has a budget of EUR 25.81 billion for 2021-2027.

Discussions have taken place between representatives of the European Commission and Ukraine with a view to drawing up a non-binding instrument setting out political commitments with regard to the adapted TEN-T indicative maps.

The standard-gauge cross-border rail connections will strengthen the transport connectivity between the EU and Ukraine and will contribute to the EC’s ambition to shift 75% of road freight transport towards rail and inland waterways thus creating a sustainable and connected transport system.

The Ukraine-EU cooperation in the field of transport is regulated by the Association Agreement which aims to promote the development of stable, efficient and safe transport, as well as to intermodality and operational compatibility of transport systems.

The two sides intend to improve the movement of goods and passengers, increasing the flow of traffic between Ukraine, the EU and third countries in the region by removing administrative, technical, border and other barriers, promoting the transport network and modernising infrastructure.

To boost the connectivity with the Eastern countries, the European Commission and the World Bank unveiled in 2019 an investment action plan on the indicative TEN-T identifying the priority transport investment projects estimated at EUR 12.8 billion. Under the plan, Ukraine would modernise its transport infrastructure with a EUR 4.5 billion investment for 39 projects. EUR 873 million investment was estimated for nine rail projects covering 530 km lines.

These include the modernisation and electrification of standard-gauge Kovel-Yagodyn-State border rail connection as well as the Mukachevo-Chop-Zahony (Hungary)/Chierna-nad-Tisoj (Slovakia) project.

Russia’s invasion of Ukraine affected the road and rail infrastructure facing severely disrupted connections. Dozens of rail bridges and railway lines were destroyed and besides the projects underlined by the action plan, Ukraine and the EU would need to tackle the future challenges to restore the transport infrastructure ensuring a coherent connection between the two sides.