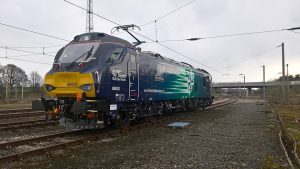 Direct Rail Services (DRS) will work with automotive transport specialist STVA UK to transport Ford cars between the Ford factory in Dagenham to their rail terminal, outside Liverpool. The new rail service will operate between six to eight times a week with the possibility to extend them to up to 10 times per week.

Under the contract, DRS will work with automotive transport specialist STVA UK, carrying a mixture of double deck and single deck wagons tailor made to transport vehicles.

Although the two terminals are non-electrified, the line is electrified, allowing DRS to use its Class 88 locomotive for the entire journey. The locomotive can use diesel power both at the start and at the end of its journey.