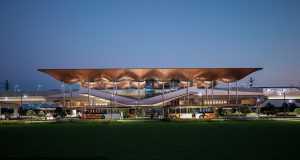 The Victorian Government has unveiled the design of the Pakenham and East Pakenham stations on Pakenham line, which are being constructed as part of the fast-tracked project to remove level crossings and create six new open space for citizens.
With four tracks, including dedicated bypass tracks, the new East Pakenham station will remove a major V/Line and Melbourne metro trains bottleneck, slashing congestion and boosting reliability for regional and metropolitan passengers.

“The new stations at Pakenham and East Pakenham will ensure we have the right infrastructure in place at the right time to serve people in these booming communities,” Jacinta Allan, the Minister for Transport Infrastructure said.

The new premium Pakenham station will rejuvenate the busy pedestrian and shopping precinct, and create safer and more direct links between public transport, the town centre and additional parking. With the level crossing at nearby Cardinia Road already gone, the removal of all level crossings in Pakenham will slash travel times and transform the way locals move around their community.

The renowned architecture firm Genton is working to develop the modern stations, with the design of Pakenham Station reflecting the character of the suburb. A new station forecourt, bus interchange and two dedicated pick-up and drop-off zones will provide easier and safer access to the spacious, light-filled station. Lifts and stairs will take passengers to two platforms for regional and metropolitan trains, with upgraded modern facilities and a climate-controlled waiting room at street level.

An additional 450 car parking spaces will be built at Pakenham Station, as well as secure bike storage and new walking and cycling paths alongside the rail line.
The construction of a 2.5 km rail bridge over McGregor Road, Main Street and Racecourse Road will create around six MCGs of new open space for locals.

Works to remove three level crossings will begin later this year which are expected to be completed in 2023-2024, when the new Pakenham stations and open space will be opened.

On the Pakenham line, another five crossing removals were announced and with the Melbourne Metro Tunnel, bigger trains and next-generation high-capacity signalling, the upgrades will provide 121,000 additional passengers each week.
22 level dangerous and congested level crossings will be removed along the Pakenham line, a AUD 15 billion (USD 11 billion) project also covering the modernisation of the entire line expected to be completed in 2025.