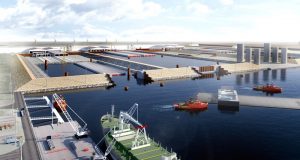 Femern A/S will start the construction works on Fehmarnbelt tunnel in Denmark as the company is activating the main construction contracts with Femern Link Contractors (FLC) with effect from 1 January 2021.

On the Danish side, the construction works of the harbour at Rødbyhavn, the tunnel portal in Lolland and administrative facilities will start at the beginning of the next year. The harbor will be over 500.000 square meters.

“This is truly a great day for the Fehmarn tunnel project. The main stages of the construction phase will now commence,” said Claus Baunkjær, the CEO of Femern A/S.

The harbour is the gateway for the construction of the tunnel element factory. In the factory, the tunnel element is equipped with watertight steel bulkheads at each end. The bulkheads keep the inside of the element completely dry. They also ensure that its approximately 73,000 tonnes float in spite of the enormous weight. The immersed tunnel will comprise 89 elements made of reinforced concrete at the Rødbyhavn factory, with 79 217-m-long standard elements and 10 special elements.

The tunnel element factory will be one of the biggest factories in Denmark and the overall construction site will be the largest of its type in Northern Europe.

Activation of the contracts is being carried out with due respect for the ongoing German approval process of the Fehmarnbelt project. In February 2019, Femern received the signed approval from the authorities in Schles-wig-Holstein. According to the Danish Ministry of Transport, the construction work on German side will be ready to start by mid-2022. It is expected that the Fehmarnbelt tunnel link will be opened in mid-2029, the Ministry says.

The opening is six months later as the construction was postponed due to coronavirus pandemic.

The 18-km rail-road tunnel link between Germany and Denmark will allow trains to run at speeds of 200 km/h. EUR 7 billion (DKK 52.6 billion) is the total value of the project .