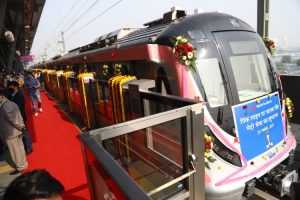 Delhi Metro has introduced the driverless train operation on the 59 km long Pink Line from Majlis Park in the northern part of the city to Shiv Vihar terminal metro station in the North-East Delhi.

The official ceremony was attended by the Secretary of the Ministry of Housing and Urban Affairs (MoHUA) Durga Shanker Mishra and the Managing Director of DMRC, Mangu Singh, while the Minister of MoHUA Hardeep Singh Puri and the Transport Minister of NCT of Delhi, Kailash Gahlot, attended via videoconference.

Delhi Metro Rail Corporation (DMRC) says that initially the train operator will remain onboad to instil a sense of confidence and assistance. The technology’s higher level of diagnostic features will help move from conventional time-based maintenance to condition based maintenance. This will also reduce maintenance down time of trains.

The driverless technology was launched on the Magenta Line in 2020 with which the Delhi Metro had entered world’s 7 per cent driverless metro system. The DMRC has already started reaping benefits of driverless operations on the Magenta Line in terms of increased availability of coaches for service. Reliability of the trains have increased manifold due to exhaustive self-tests done before induction in service everyday automatically eliminating all possibilities of human error. The benefits will further increase with a longer network under driverless train operation.

With this project, the automated train operation on Delhi Metro system reaches 97 km, which is 4th largest in the world and the only driverless network in India. After the completion of Phase 4, when driverless operations will be available on the extensions of the Pink and Magenta Lines as well as on the Aerocity – Tughalakabad Silver Line, DMRC shall become the world’s second largest driverless metro network with 160 km of automated operation.