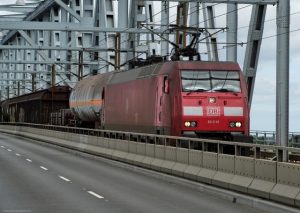 “By equipping our powerful EG 3100 series locomotives with ETCS equipment, we will also be able to offer climate-friendly, cross-border transport services for our customers in the future,” said Ralf Günter Kloß, Member of the Management Board for Production at DB Cargo.

The electric freight locomotives of the EG3100 series will be equipped with Alstom’s Atlas ETCS Baseline 3 Release 2 solution. This complies with the latest European standards for rail interoperability and enables trains to run smoothly, safely and reliably even on routes across national borders.

As part of the order, the existing German and Danish systems will be upgraded to communicate with the ETCS signalling system. In addition, the Swedish system will be integrated as software into the new ETCS hardware. First certification runs with a retrofitted prototype are scheduled for the end of 2022. This will be followed by the gradual retrofitting and approval of the remaining freight locomotives.

“We are pleased to be making a significant contribution to the digitalisation of trans-European freight transport by retrofitting the locomotives. Rail freight transport plays a crucial role in the mobility turnaround – this is where our digital solutions come into perfect play,” said Frederic Rybicki, the Managing Director Alstom Digital Mobility Germany & Austria.

The EG3100 locomotive is a descendant of the EuroSprinter family built by Siemens for Scandinavia and tailor-made for operation in the tunnel under the Great Belt and as a two-system locomotive designed for use in Denmark, Sweden and Germany.