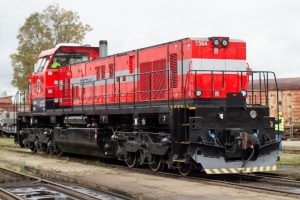 CZ Loko and Estonian rail freight carrier, Operail, agreed on a contract for complex upgrade of six C30-M locomotives, manufactured by General Electric. The modernised vehicles will be delivered in the first quarter of 2021 and will be leased for operation in the Ukrainian Dnipropetrovsk region, where it averages 150 km of heavy shunting daily.

Under the contract, CZ Loko will be responsible for all structural components and assembly of all of the above-the-frames components, manufactured the Czech company at its facility in Jihlava. Operail will be supplied with diesel engine blocks, alternators, cabs, hoods, cooling systems, brake systems or electronic control equipment.

At Operail’s depot in Tapa remanufacturing process will take place which includes refurbishing activities, main frame modification, followed by the final assembly of the new vehicle. CZ Loko will supervise all these activities.

The new C30-M six-axle diesel-electric locomotive is the successor of the original American C30 locomotive, designed for heavy shunting or line service on lines and sidings with a 1520 mm track gauge. They are powered by a CAT 3512C engine. The six-axle locomotive weighs 138 tonnes with an axle load of 23 tonnes, and it uses AC/DC power transmission.

One year ago, Operail and Lemtrans, an Ukrainian freight forwarder, signed a contract to lease two modern C30-M locomotives, built at the Tapa depot.