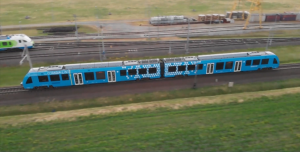 Alstom is presenting its train to a variety of local stakeholders, including regional operators, transport authorities, government decision-makers and leading media, in order to highlight the potential of the Coradia iLint for sustainable transport in Poland.

The showcase comes in the wake of the announcement of Poland’s National Recovery Plan, which includes provisions for the introduction of thirty low-emission trains for Polish regional operators by 2026.

“The Coradia iLint trains represent a huge opportunity for Poland to reduce CO2 emissions and even decarbonise rail transport. Thanks to hydrogen-powered public transport, regional operators can be beacons of modern mobility, as experienced recently in Germany, The Netherlands and Austria,” said Sławomir Nalewajka, Managing Director of Alstom in Poland, Ukraine and Baltics.

The hydrogen passenger train is built in Salzgitter, Germany whereas body shells are produced at Alstom Konstal site in Katowice, Poland.

If Poland intends launch tender for hydrogen trains and to construct refueling stations, Alstom Konstal has the necessary tools and technology to manufacture them. The Coradia iLint is built on the same platform as Coradia Lint diesel train family, which has been produced in Chorzów. The difference between the two train types is the propulsion as the diesel traction has been replaced by fuel cells technology which allows completely clean train operation with a performance matching that of regular Coradia Lint diesel multiple units, which means these trains can operate the same timetable as the diesel ones. Passenger capacity can reach 300 passengers and the train has a range of 1,000 kilometres, as already demonstrated during daily operational service.

Poland’s hydrogen market is substantial as Poland is the fifth largest producer of hydrogen worldwide. It produces 14% of all hydrogen generated in Europe, which is used predominantly in industrial processes. Demand for this type of fuel is growing steadily and hydrogen could become a viable, clean, and widely available source of energy. As an important hydrogen producer in Europe, Poland has the opportunity to take advantage of this trend and develop its own technological and industrial solutions and to export hydrogen to other countries, such as Germany, which was the first in Europe to introduce hydrogen technology train for commercial use.

The Coradia iLint is the only operational passenger train powered by hydrogen fuel cells which features several different innovations such as clean energy conversion and efficient energy supply and storage system combined with intelligent energy management. The completely emission-free train which emits only water vapor and condensation is designed specifically for use on non-electrified lines, it enables clean, sustainable train operations.