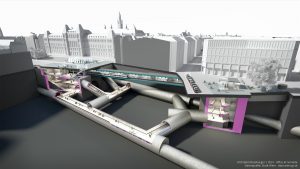 Wiener Linien, the public transport operator of Vienna, awarded a EUR 242 million contract for the construction of two lots of the extension of U2 and U5 lines.

The contract was awarded to a consortium comprising Hochtief Infrastructure Austria, Swietelsky and Habau Hoch und Tiefbau. Hochtief has a share of approximately
EUR 80 million. The preparatory works have started, and construction will take almost six years.

The contract is part of the U2xU5 intersection which will close a major gap in the inner-city metro network. The project covers the U2 line extension from Vienna City Hall (Rathaus station) and the construction of the first section of the new U5 to Frankhplatz/Altes AKH. Following on from the extension of the U2 to Aspern in the north-east of the city, a completely new southbound branch will be added to the U2 from the Rathaus station. Work on extending the U2 from Rathaus (U5) began in autumn 2018 and will cross the Neubaugasse (U3), Pilgramgasse (U4) and Reinprechtsdorfer Straße to the provisional final stop at Matzleinsdorfer Platz, where passengers will able to change to suburban trains. This new section is scheduled to enter passenger operation in 2026. A further extension of the new U2 southbound line via Gußriegelstraße to Wienerberg is planned for a later phase.

As part of the U2xU5 project, 11 new stations and 9 kilometres of new underground tracks will be built, of which 6 km for the U2 and 3 for the U5. 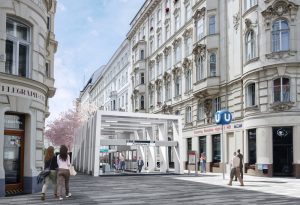 The project also includes a new public transport hub at Neubaugasse, where U2 will cross under the existing U3 tunnels about 37 metres below ground level. Neubaugasse station is expected to become the second busiest underground hub in the Vienna network, nearly reaching the passenger numbers of the central station underneath St. Stephen’s square (the Stephansplatz station).

The U5 will be Vienna’s first fully automated metro line. It will take over the U2 section between Rathaus and Karlsplatz from 2027 and initially operate to Frankhplatz, next to Altes AKH. The new metro line will then be extended to Hernals in the next phase of expansion.

The underground construction work will has started in January at the future new building station at Frankhplatz (U5) and in the vicinity of the U2xU5 Rathaus junction. Further construction work along the new 4.5 km long U2 route will start in the first quarter of 2021.

The total investments at the end of the project amount to EUR 2.1 billion euros covered by the Austrian Government, Wiener Linien and the City of Vienna.