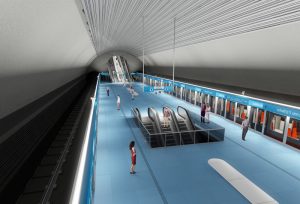 A consortium comprising five companies won the contract for the construction of the first section of Prague metro Line D between Pankrác and Olbrachtova.

The consortium which comprises Subterra, Hochtief CZ, Hochtief Infrastructure, Strabag and Ed. Züblin, submitted an offer of CZK 13.75 billion (EUR 536.6 million).
“A year and a half after the announcement of the tender, we were able to sign a contract with the winning association. We can start building as soon as we obtain a valid building permit,” Petr Witowski, the CEO of DPP said.

The consortium will construct a 4.6 km line from Pankrác to Nové Dvory and five stations. As part of the contract, EUR 138 million is the share of Hochtief that will be responsible for the construction of two 33-metre-deep metro stations and a 1.2 km tunnel.

Three international associations comprising in total ten companies submitted the bids for an open public tender to construct the Pankrác – Olbrachtova section on the metro Line D. A Czech-French association of companies SMP CZ, part of Vinci Group of the Construction Division and Dodin Campenon Bernard ranked the second, while the consortium comprising Doprastav, TuCon, and STI was listed on the third place.
The construction works are expected to start by the end of this year.

The 10.6 km metro line will be served by ten stations from Náměstí Míru station (on the Line A) crossing the Line C at the Pankrác station and continuing towards southern area to the Písnice town, situated in the municipal district of Prague 12. The metro Line D will be constructed within two phases. The first one covers the construction of the line from Pankrác to the depo of Písnice and it will be later extended to the city centre and Náměstí Míru station which is designed to allow further extension to the north.
The Line D will be Prague first automated metro line which will be equipped with the latest generation of CBTC system.

The Pankrác – Olbrachtova section will substantially improve the congested traffic in the western and southern part of the city where about 150,000 inhabitants live. They can use only buses as public transport services to reach the Prague centre and to transfer to the Line Cat Kačerov station.

The construction of the new metro line was approved by Prague City Council and has an estimated value of CZK 52 billion (EUR 2 billion).

Currently, Prague metro system is 65.2 km-long, comprising three lines (A, B, and C) and 61 stations.