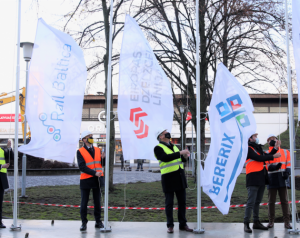 The construction of Rail Baltica Riga hub has been launched on November 23 with restrictive measures to curb the spread of COVID-19.

“Rail Baltica will enable us to improve the Latvian public transport system that connects Baltic metropolises with the largest cities of Latvia and ensure transport connections between Riga city centre and its suburbs. Rail Baltica trackwork is designed for both international and regional, as well as local trains, reaching speeds of up to 200 km/h. Rail Baltica loop to Riga International Airport will strengthen Riga’s central role in the Baltic aviation industry,” said Tālis Linkaits, Latvia’s Minister of Transport. 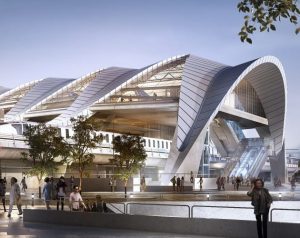 he first construction works of Rail Baltica Riga hub will be performed on a building site located between the Riga central railway station and the building of the Ministry of Transport, and along the railway line between Maskavas and Lāčplēša streets. Throughout the entire period of construction both the pedestrian and road traffic arrangements around Riga central railway station will remain uninterrupted and safe.

The construction works are performed by the general partnership of constructors Bererix unde a EUR 430.5 million contract signed in May 2020. “Construction company Bererix has started building works on the southern side of Riga Central Railway Station. The building site is set up to enable continuous work and social distancing for about 100 workers employed on the site and working in day and night shifts,” said Xavier Debruche, Bererix project leader.