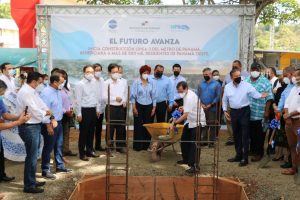 The President of Panama Laurentino Cortizo Cohen and Panama Metro general director, Héctor Ortega have officially inaugurated the construction works for the Line 3 which will generate 5,000 direct and indirect jobs.

“We never doubt the ability and willingness of our country to undertake great projects, overcome difficulties, overcome adversity and move forward. This project is a sample, a good example of what we are capable of,”, the President said.

The project has a value of USD 2.8 billion and is expected to be completed within four years. The works for line are performed by the HPH Joint Venture, comprising Hyundai Engineering and Construction and Posco E&C. The consortium was awarded a USD 2 billion contract to design, build and finance the project.

The line will have a length of 24.5 km served by 14 stations from Albrook to Ciudad Futuro, in the district of Arraiján, province of Panamá Oeste (Panama West).

The line which will be primary elevated, will include an underground section with an approximate length of 5.3 km, with a depth of no more than 64 meters. The construction of this section is estimated at USD 360 million.

Panama Metro Line 3 will be operated by six-car trains which will be manufactured by a consortium of Hitachi Rail and Mitsubishi Corp under a USD 883 million contract which includes the delivery of the rolling stock and equipment. 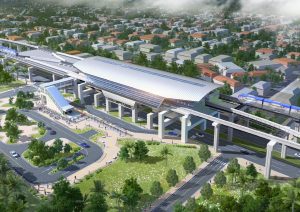 The Line 3 is expected to carry 160,000 passengers reducing the travel time from 90 minutes to 45 minutes along the line, offering connection with bus transport services. It will provide parking areas at three stations in Ciudad del Futuro, Nuevo Chorrillo and Vista Alegre.

“Improving mobility in Panama City is one of the main commitments that the Panama Metro has and that, even in the midst of the current health crisis and its economic consequences, we continue to contribute to the economic growth of the country with the launch of Line 3” Héctor Ortega said.

The authorities are exploring the possibility to expand new metro line by 34 km to the district of La Chorrera, situated 30 km south-west of Panama City.