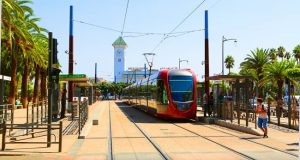 The first contract covers the electrification of both new lines. EUR 24 million is the value of this contract which involves the design, construction and commissioning of 25 km of overhead contact line, as well as the provision of power supply systems, with the installation of 21 electrical substations.  The Line T3 will have a length of 14 km served by 20 stations providing the transport connection between the Ben M’sick,Sidi Othmane and Sbata borrows to the Casa-Port train station via boulevard Mohamed VI. The line T4 will be 12.5 km-long served by 19 stations connecting the industrial zone Moulay Rachid to the mosque Hassan II, passing through the city centre.

The second contract involves the laying of 14 km of track and 11 switches and crossings on section 3, located in the city centre of Casablanca, for both future tramway lines. This second contract amounts to EUR 10 million.

The T3 and T4 lines will help strengthen the public transport network of the most populous city in Morocco, with over 4 million inhabitants. The construction of the two tram lines will provide a new approach of mobility in Casablanca.

Colas Rail has participated to the implementation of Casablanca tramway programme by winning contracts for the construction of T1 and T2 lines with the first contract for tracks and platforms and a second for overhead contact lines, power systems and electrical substations. The company has also been involved to the construction of lines 1 and 2 of the Rabat-Salé tramway and its extensions.