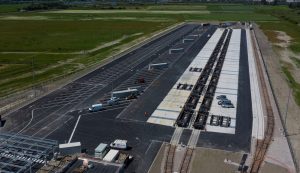 CargoBeamer has started the operation of Calais terminal which will ensure regular transport services of semi-trailers by rail. Four roundtrips will be operated on the rail route between Calais and Perpignan in southern France, with at least one more destination to join until the end of the year.

Located close to the port of Calais and the important Channel Tunnel towards the British Isles, the transhipment facility in supposed to serve as an important junction of company’s international route network.

“The opening of our first terminal is an important milestone and a real quantum leap for the development of our company. Here in Calais we are going to put our technology into regular market use for the first time and will continue to strengthen the modal shift of transports towards sustainable solutions such as rail,” Hans-Jürgen Weidemann, CEO and founder of CargoBeamer said.

A first domestic French lane to Perpignan close to the Spanish – French border CargoBeamer enables intermodal transport towards the Mediterranean Sea and Iberian Peninsula. After a one-week starting phase with two weekly roundtrips, the route will be operated with four roundtrips per week permanently.

Euro Cargo Rail (ECR), a French subsidiary of DB Cargo, serves as cooperation partner. Each train offers a total of 36 seats for trailers, which consist of 24 special CargoBeamer – railcars and six usual double pocket wagons. Besides the French corridor the Calais terminal also aims to provide intermodal transport streams towards Central and Eastern Europe. In this context, a new route between Calais and Domodossola in Northern Italy will be launched by the end of this year.

The terminal site in Calais allows CargoBeamer to handle six train pairs daily, which means six incoming and six departing trains per day, resulting the transport of 432 semi-trailers for every day.

A second expansion stage is scheduled for 2023 and will double the terminal capacity to a total of twelve daily train pairs. The shifting process of an entire freight train with simultaneous loading and unloading takes about 20 minutes.

During the eleven-month construction period CargoBeamer was joined by Eiffage. The project was implemented with the financial support of Frence government and the region of Hauts-de-France and it has also received a EUR 7 million European financing the under the 2018 CEF call for proposals. The EU funding covered 20% of the total investment costs of the project, which amounted to EUR 32 million.